iBall Andi 4.5M Enigma wants the selfie phone tag despite not having a front flash

Equipped with an 8MP front facing camera, the iBall Andi 4.5M Enigma has just narrowly missed being an impressive and affordable selfie phone, as its makers have chosen to not offer a front-facing flash with it. This smartphone is being listed on the company’s website right now, where its price has been revealed to be Rs 8499.

The Andi 4.5M Enigma from iBall also houses a 13MP BSI rear camera which does come with a flash. That 8MP front snapper which we talked about features a fixed focus mechanism which is another one of its downsides, however, the presence of a wide 88 degree lens might provide some respite to prospective buyers. 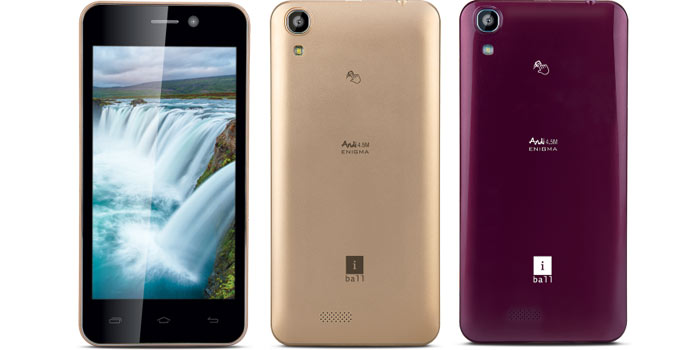 Another unique attribute about this smartphone is that its rear surface is a touch sensitive one, so it recognizes gesture controls up to some capacity. We’re not quite sure how exactly this technology works, as iBall hasn’t explained it any further than this.

The Andi 4.5M Enigma comes fitted with a 4.5-inch IPS display with a qHD resolution of 960 x 540 pixels. It runs the Android 4.4 Kitkat OS and is fueled by a quad core processor and 1GB of RAM.

Here’s a short look at the specs of the iBall Andi 4.5M Enigma:

The iBall Andi 4.5M Enigma selfie phone is still to be made available in the Indian market, but when it will, its Rs 8499 will definitely play in its favor.