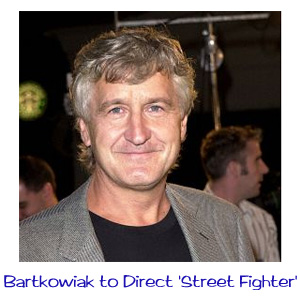 Polish cinematographer, director and actor Andrzej Bartkowiak has been signed by Amritraj’s Hyde Park Entertainment and Capcom to direct the forthcoming “Street Fighter” live-action feature film, which is based on the renowned videogame, reported Variety.

Fox will be the official distributors of the movie. Production is slated to kick off by early 2008. Justin Marks has scripted the movie, according to Variety.

The movie will be produced by Ashok Amritraj and senior exec Patrick Aiello, while Capcom will wear the cap pf executive producer.

This is the second “Street Fighter” videogame-to-movie adaptation. The first one was released in 1994 and had Jean-Claude Van Damme starring in it. However it made only 33 million dollars in the box office.

The new “Street Fighter” movie will have a female fighter Chun Li as protagonist and will focus on her justice trip.

Bartkowiak made his feature debut as cinematographer on “Deadly Hero” (1976), but his fame can be attributed highly for the breathtaking location captures in “Prince of the City” (1981). His films – The Verdict, Terms of Endearment, and Prizzi’s Honor have even received Academy Award nominations for Best Picture. He has also directed the Doom movie along with Cradle 2 the Grave, Exit Wounds and Romeo Must Die. As a cinematographer, he has worked on films such as Lethal Weapon 4, U.S. Marshals, Falling Down and Speed.