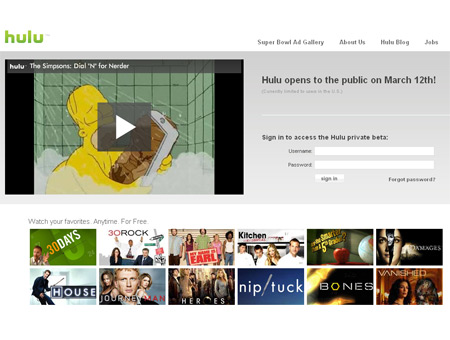 On Wednesday, Hulu, the NBC Universal/News Corp. joint online video initiative will be publicly introduced with new affiliations with Warner Bros. Television Group, Lionsgate and an expanded film line up.

Thanks to the agreement with Warner, audiences will be able to enjoy full episodes of “Babylon 5,” “Welcome Back Kotter” and clips from “Friends.” On the other hand, Lionsgate releases on the site will include “Requiem for a Dream” and “Killing Zoe.”

In addition, the recently penned content deals between Hulu and Michael Eisner’s production studio Vuguru, which produced “Prom Queen”; the Onion News Network; the NBA; and the NHL, brings in great news as the site will also showcase full-length NCAA men’s basketball tournament games from the past 25 years.

And the list doesn’t simply end there. Hulu also features programming from Reveille, Smithsonian Networks and World Wrestling Entertainment along with full-length movies from Sony, Fox, Universal and MGM.

So altogether, the site has over 50 affiliates, full-length episodes of more than 250 series and 100 plus feature-length movies.

The NBC Universal – News Corp. tie-up was first announced around a year ago, and a beta version of the site was rolled out in October. At that time Hulu debuted in private Beta and on AOL, MySpace, Yahoo, MSN. Its player can be embedded on blogs and other sites too.

Hulu has received $100 million in funding from Providence Equity Partners.

Speaking about the site, Hulu CEO Jason Kilar, a former Amazon executive, said that post the beta launch, Hulu’s inventory has quadrupled and the content has been seen by over 5 million viewers across the internet. Without revealing exact numbers, Kilar said that the site’s player has been embedded over 50,000 times across 5,000 sites.

The site which kicks off tomorrow, March 12th, will currently be limited to users in the U.S.