A company hired by Samsung to make PCBs (printed circuit boards) for its upcoming Galaxy S5 flagship got hit by a massive fire yesterday which has apparently damaged $1 billion worth of its equipment. This has raised concerns about the availability of the said device.

The factory in question is located in Anseong, South Korea, and as has been revealed by ANA, the fire was detected at around 7am on Sunday. Despite fire engines having reached the spot minutes following that, a large portion of the equipment and components were destroyed. The blaze took 81 fire trucks and 6 hours to be extinguished completely. 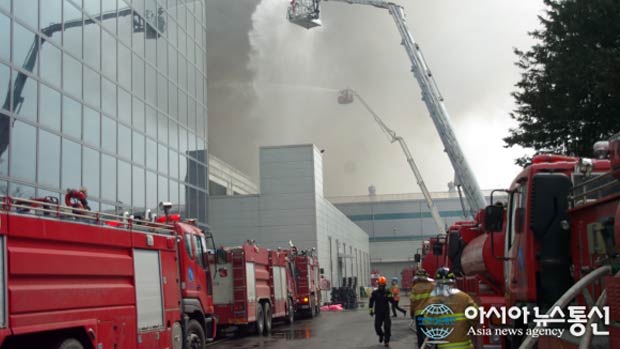 Although Samsung has indeed revealed that this was a factory it has employed for manufacturing PCBs for the Galaxy S5, the company has also said that this is not the only one commissioned by it for the job. The South Korean technology giant has claimed that the April 11 launch of the device will take place as planned, however, there are still concerns about supplies running out early, and the phone’s delayed release in markets other than the US and UK.

The Samsung Galaxy S5 was unveiled at last month’s MWC in Barcelona, complete with its new design, its unique fingerprint scanner, its water and dust-resistance features and more.

Here’s a deeper look at its key components: