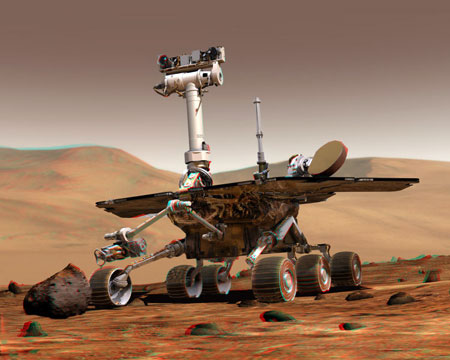 The Mars Exploration Rover is losing power as an enormous dust storm on Mars has deteriorated. According to Space.com, the storm was thousands of miles wide last week and now it is affecting the rover. Scientists at the National Aeronautics and Space Administration (NASA) had not thought that the storm would affect the rover operations.

John Callas is the Mars Exploration Rover project manager at NASA’s Jet Propulsion Laboratory. He says, “The storm is affecting both rovers and reducing the power levels on Opportunity. We are keeping an eye on this as we go forward, but our entry into Victoria Crater will be delayed until no sooner than July 13. We have some data that show the atmospheric opacity is decreasing, so the storm might have peaked and we may have passed the worst of this. The situation could improve quickly from here, but we will have to wait and see.”

‘Opportunity’ is now parked near Duck Bay at the rim of Victoria Crater on Meridiani Planum and its highly anticipated and risky entry into Victoria Crater is delayed for at least several days. However, the Mars Reconnaissance Orbiter shows that the storm is regional and includes several local areas of especially elevated dust activity. But they feel that the storm has reached its peak.

Steve Squyres is a researcher from Cornell University researcher who is also the principal investigator of the rover mission, who remarks, “While this only represents enough dust to coat the planet to about the thickness of a human hair, it is enough to decrease the brightness of the noon sun by 96 percent compared to a completely clear atmosphere. The solar arrays also receive light that is scattered from the dust, so the decrease in power is not nearly that great.”

The biggest problem that the rover would face is that it would not be able to recharge. Mars Exploration Rover uses solar panels to power itself. Callas is of the view that the condition could improve but NASA will have to wait and see what lies ahead. It seems that authorities will have to brace themselves for a rough time ahead!