Believe it or not! Apple iPhone 6 bends in your pockets

Imagine paying $949 for an iPhone 6 Plus only to realize that it managed to develop a big bend on its body while it was in your pocket. Yes, reports and confirmations from all over are pouring in every minute from users who are fuming about this flaw in the Apple-manufactured device.

The matter came to light when the device started developing slight bends while resting in some users’ front pockets. While the iPhone 6 Plus is allegedly more susceptible to this issue, the smaller iPhone 6 too is getting bent to a certain extent.

Apple is still to respond on this matter, but we’ll update this post whenever it does. For the moment, if you’re the owner of one of the two affected devices, it’s advised that you use them with their respective cases.

Giving us a fair idea of exactly how much of force is needed to make the iPhone 6 Plus develop its curves is the video we’ve embedded in the space below (via Engadget). It was made by the YouTube channel Unbox Therapy, and it later also published a clip in which the same test was performed on the Samsung Galaxy Note 3 without any undesired results. 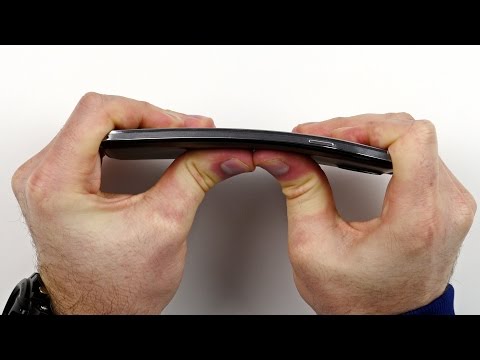 Naturally, the Internet is abuzz at the moment with this shocking iPhone 6 reality, and the issue is also being referred to by an undoubtedly catchy term called ‘bendgate.’ Remember ‘antennagate’? Accompanying reports of bent models of the Apple smartphone on Twitter are memes and jokes poking fun at it. There’s one in particular coming from LG UK’s Twitter account, that you wouldn’t want to miss.

This fault in the iPhone 6 range is due to its use of the aluminum body and there’s practically nothing Apple can do about it now. At the most, it can offer free cases to its buyers, but what’s evident is that the company has landed itself in a massive pickle here. Let’s see how it chooses to tackle this.