Huawei’s Ascend P6 is certainly one of the best looking smartphones we’ve seen from the Chinese OEM and it has earned a lot of popularity globally. And it looks like the company is working on a cheaper version of the handset which is said to go by the Ascend G6 moniker. The upcoming device will feature the same design, but will have altered specifications.

The Huawei Ascend G6 has been spotted in China by MTKJS where it has received certification. The handset has the same form factor as the P6, but the dimensions have been altered. The latter is known for its super slim design of 6.18mm. Well, the cheaper model will retain a lean appearance, but will be slightly thicker at 7.5mm. 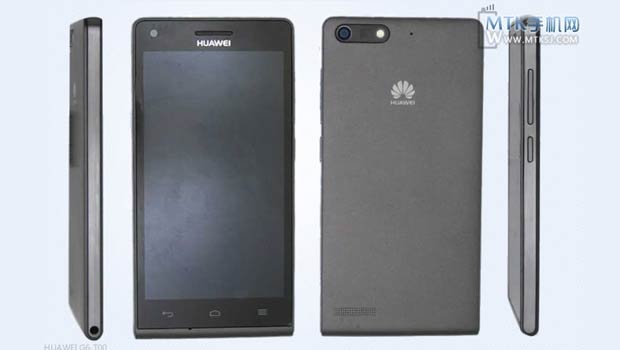 The screen size of the Ascend G6-T00 hasn’t been mentioned, but the resolution is said to be qHD 960 x 540 pixels. Huawei might retain the same 4.7-inch display size for this model, but something around 4.5 inches would be more suitable for the low resolution panel. Other specifications have also been leaked. They include a 1.3GHz quad core MediaTek processor, 1GB of RAM, a microSD card slot, a 5MP front camera and an 8MP rear lens.

There’s also mention about support for China Mobile’s TD-SCDMA radio. The Ascend G6-T00 will feature the Emotion UI 2.0 and will most likely be powered by Android 4.2 Jelly Bean. In other news, the company is reportedly working on the Ascend P6S smartphone that’s said to go on sale by the end of this month. The device is rumored to carry an octa core processor and a 4.7-inch HD panel. Also, the original P6 handset is scheduled to receive an update to Android 4.4 KitKat soon.

Chances are high that the Huawei Ascend G6-T100 will go official this month itself.