Huawei Watch is company’s first ever Android Wear offering, here’s how it looks

What you’re seeing in the space down below is an advertisement of the Huawei Watch which is still to be officially announced by the Chinese company. Whether it has been leaked or whether it has been put up by the manufacturer intentionally is not known at the moment.

The Barcelona airport is quite a busy place right now, with folks from all over the world thronging it in order to attend the MWC extravaganza, and that’s exactly the place where this Huawei Watch ad has been placed. As revealed by a picture clicked by the folks over at Android Central, the ad refers to the product with the words ‘Timeless design. Smart within.’ 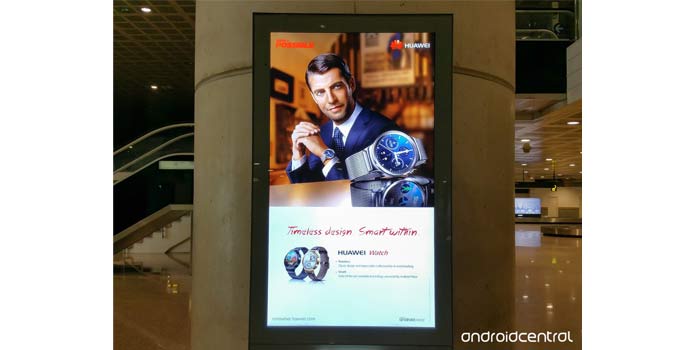 As you can see, the ‘timeless design’ part definitely applies to the fact that this watch bears a circular display, just like the Moto 360, the LG G Watch R and the LG Watch Urbane. And the ‘smart within’ part is referring to the Android Wear OS that forms part of its offerings.

The exact specifications of this device have been kept a secret. What we have gathered however is an idea of the kind of straps it will be purchasable with. A silver version with a matching metal band can be spotted, while even a gold variant with a brown leather strap can be seen in the ad. And then there’s even a black colored model which seemingly has a silicon strap affixed to it.

March 1 falls tomorrow, and that’s when the Huawei Watch will be unveiled in its entirely at the company’s MWC conference. We’re most likely to get an idea about its price then.