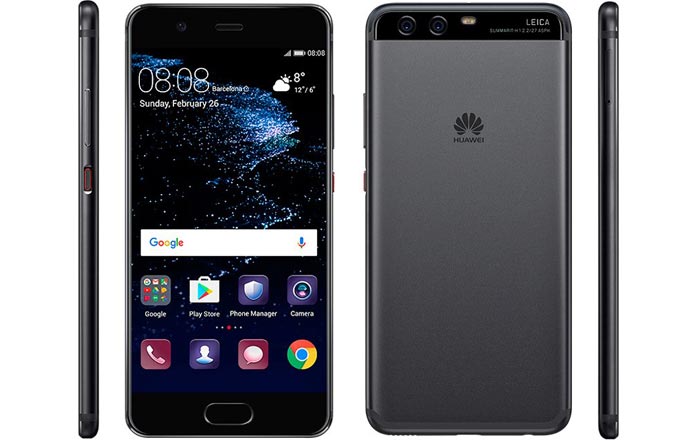 Huawei’s upcoming P10 has gotten leaked just days away from its official unveiling on February 26 at the MWC 2017. The handset is expected to make an appearance at the event alongside the P10 Plus and a new smartwatch.

The latest look at the flagship P10 arrives courtesy Evan Blass. The photo seems to be of the official press render of the device in its dark grey or black avatar. Huawei had released a teaser for the handset earlier this month which indicates that it’ll be sold in blue, green and gold color variants as well.

The photo confirms quite a few assumptions about the P10, including its expected Leica-branded dual-camera setup. Blass didn’t mention any specs in his tweet, but the smartphone is probably going to carry a Kirin 960 SoC, a 5.2-inch QHD screen, and 3100mAh battery. Storage options may consist of 4GB/64GB and 6GB/128GB alternatives.

Huawei recently confirmed that it would be announcing its latest EMUI 5.1 skin at the MWC 2017. The software will probably be based on Nougat, just like its predecessor. The P10 and P10 Plus are likely going to be the first to feature the UI before it trickles down to other members of the brand’s portfolio.

Speaking of the P10 Plus, recent reports concerning the handset indicate that it’ll have a dual-curved design to distinguish it from the standard variant. Some say it might take things further with an impressive 8GB of RAM. We’ll let you know more about Huawei’s plans for the series the moment it goes official on February 26.