The Huawei Honor V8 has already been leaked extensively over the course of the past few weeks and is now expected to see the light of day on May 10. For anyone interested in a sneak preview of what’s to come, the new handset has been leaked in a couple of live images and a gif.

Like the P9 before it, the Huawei Honor V8 is also set to carry a dual-camera module consisting of two 12MP snappers. Based on the photo above, the setup appears to be accompanied by dual-LED flash and laser autofocus. Though it can’t be seen in the new collection of leaks, the phone is probably going to feature an 8MP front-facing shooter.

The twin-lens system will probably allow 360-degree videos to be possible, as demonstrated in the gif below. The other snap of the Honor V8 exhibits its complete back panel, showing off how tall the smartphone is. This falls in line with the phone’s TENAA certification which had stated that the handset would measure a fairly large 5.7-inch. 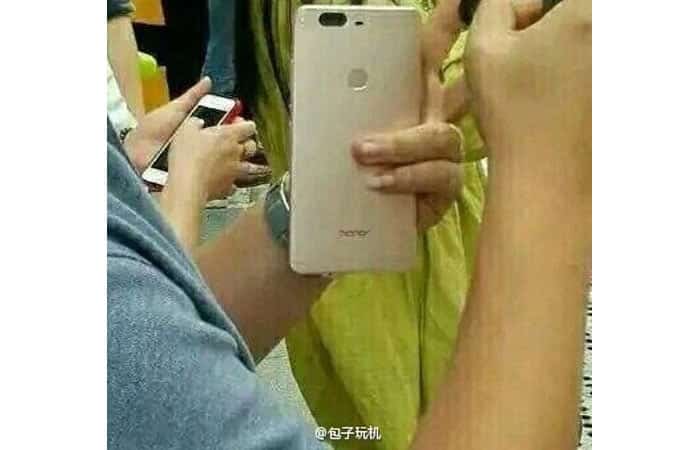 According to rumors so far, the Huawei device may be sold in two variants. The lower-specced version could come bundled with a 5.7-inch 1080p screen, Android 6.0 Marshmallow, a 3400mAh battery, 4GB of RAM, 32GB of internal storage, and an octa-core 2.3GHz Kirin 950 processor.

The higher-specced Honor V8 boasts of similar features expect for its 2.5GHz octa-core Kirin 955 SoC, 64GB of ROM and 5.7-inch QHD (1440 x 2560p) display. Exact price details for the two variants haven’t gotten leaked yet so far, though the phones will likely be cheaper than the top-of-the-line P9.

Like we said above, the Huawei Honor V8 is expected to come out on May 10. We’ll fill you in on more details about the device once it’s official.