The new Huawei Honor 7 has been churning the rumor mills since quite a long time, and it’s finally time for the device to be made official. A teaser image from the Chinese company has revealed that the phone will be unveiled to the world on June 30.

What’s interesting is that the teaser also confirms one of the Huawei Honor 7’s most rumored features – a fingerprint scanner. This will allow the handset to authenticate the personal identity of its users with their thumb imprints, providing them with an additional layer of security.

The teaser image has surfaced on Weibo according to Phone Arena, and shows the number 7 glowing out of a fingerprint scan. This much is surely enough for anyone to draw the conclusion that the upcoming Honor 7 device will ship with a fingerprint scanner. 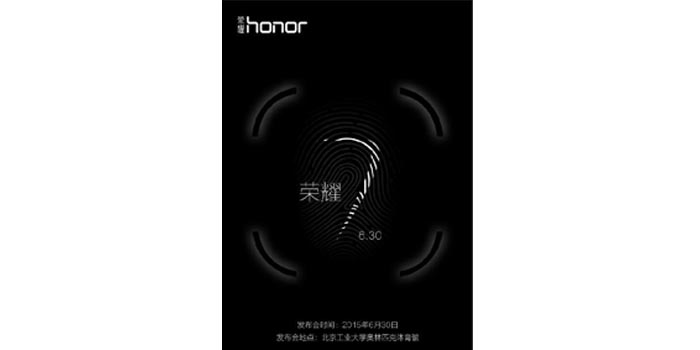 In the past, we’ve seen leaks related to this high-end handset tell us that it will kick in a 5-inch 1080p full HD display. Huawei’s very own 64-bit Kirin 935 chipset bearing an octa core CPU will apparently be powering it from within, taking assistance from 3GB worth of RAM. And while this applies to its 16GB model, its premium 64GB model is said to bear a whopping 4GB of access memory.

Furthermore, the Honor 7 will supposedly boast of a 13MP rear camera that will grab OIS for steady shooting. The device will be harnessing all its power from a 3280mAh battery that is cradled inside its body.

Everything regarding the Huawei Honor 7, including its price and release date details will be confirmed on June 30; so stay tuned until then if you’re interested in this offering.