We’ll soon know if those reports about Huawei hiding an octa core phone up its sleeves were true or not. According to invites sent out by the company recently, the Honor 4 (also going by the name Glory 4) will be officially unveiled on December 16. That’s two days before the Vivo Xplay 3S will make its formal appearance.

The Glory 4 or Honor 4 is expected to be Huawei’s answer to the Xiaomi Red Rice Hongmi. It is mostly likely to carry an octa core processor and this may come from MediaTek. If the speculations are right, then the octa core MT6592 processor it will be. The SoC’s highlight are its eight cores which can work simultaneously and are clocked at 1.7GHz. 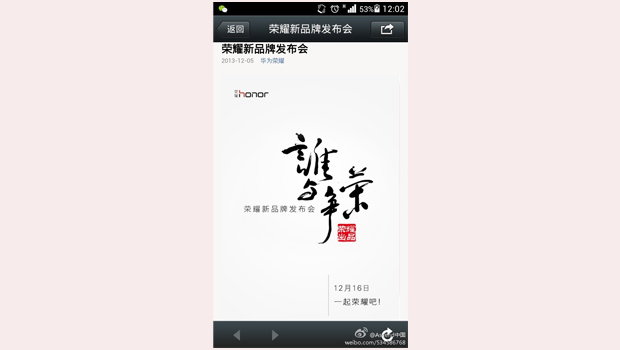 There are some conflicting rumors on the specifications packed into the handset. Older stories spoke of an 8MP camera while the latest one touts a 13MP one on the back and a 5MP webcam. Instead of 1GB RAM, we may be seeing 2GB of the same. The touchscreen stretched across the front may measure 5.5 inches.

This display could spew out visuals in 720 x 1280p HD resolution. Users may be able to avail of 32GB onboard storage space. You want a microSD card slot for expandability too? Why not. Last but not the least, the Huawei phone is said to be running on the Android Jelly Bean 4.2.2 OS.

G4Games has shared the above picture of the Huawei invite that was dug up through Weibo. It clearly indicates that the company will call it the Honor (4?).