Huawei Ascend W2 steps out in the open with WP8 OS 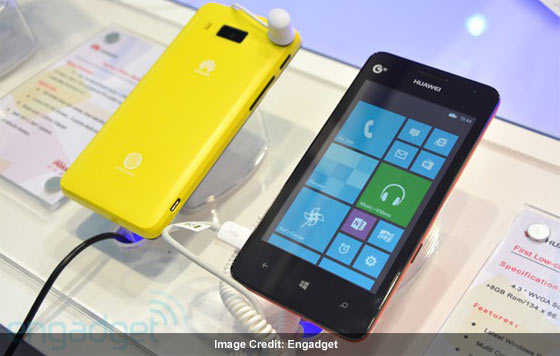 The Huawei Ascend W2 has jumped out in the open finally, following a leak of its existence which had occurred recently. Huawei surprisingly chose the Mobile Asia Expo event in China as the venue for the unveiling of this new Windows Phone 8 device which grabs hold of a 4.3-inch screen and falls in the mid-range as far as its price is concerned.

This successor to the W1 which had been launched back in January features a modest list of specifications. Its most striking feature however has to be the color-matching backlight that can be provided to it soft keys. A user is allowed to set the hue according to their liking. As reported by Engadget, the 4.3-inch touchscreen display of the Huawei Ascend W2 throws its visuals out with a resolution of 800 x 480 pixels.

The phone runs on a Qualcomm MSM8230 processor which is same as the one we have seen on its predecessor. But at 1.4GHz, the speed here is better than that of the W1. Besides, 512MB RAM has been revealed to have been granted to the device as well. Huawei Ascend W2 features a removable battery of 1,700mAh in capacity, and it’s besides this power pack, underneath the back cover, that a microSD card slot can be found.

The need for this addition is bound to arise for some, as the internal storage memory of the Huawei Ascend W2 has been kept locked at 8GB. Moreover, an 8MP camera has been placed on its rear surface as well. The particular model which was seen at the Mobile Asia Expo packed in a TD-SCDMA radio which means it’s headed to China Mobile for sure. Hence, it can be noted that folks outside the country will need to wait for a while to get their hands on it.

We’ll have more on the Ascend W2 as and when additional details of it come out.