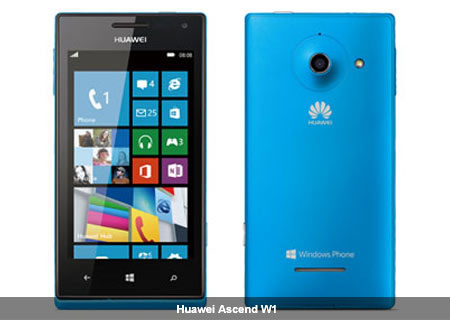 Specs of another device from Huawei, the Ascend W2, have allegedly been leaked, and they point to a fairly capable handset in the Windows Phone 8 category. Online retailer Fastcardtech has put the device up for sale, although it is currently listed as out of stock. The retailer says it provides ‘high quality Chinese electronic goods to consumers over the world,’ and has the handset in question for a wholesale rate of $289.

Let’s get right into the purported details then. The device is supposed to come with a 4.3-inch IPS display capable of throwing out visuals at an HD resolution of 1280 x 720 pixels. Not much else is known about the screen, except that it will be able to accept multi-touch gestures. The phone will run on the latest WP platform, and bring along all the attractive features associated with the OS such as Live Tiles.

On the back there should be an 8MP camera with auto focus and an LED flash capable of recording video in 1080p, while nothing has been said about a webcam on the front. Connectivity options should include Bluetooth 2.1 with EDR, Wi-Fi and DLNA support, but there should also be an internal GPS antenna. Apparently, a 3.5mm jack and a host of sensors have also been included.

It is expected to have a dual core Qualcomm MSM8960 processor made to tick at a speed of 1GHz, but only 512MB of RAM. There has been no mention of the amount of on-board memory, although as WPCentral points out, there is an option to add storage via ‘card’ in amounts of 4GB, 8GB, 16GB or 32GB. Also, the website makes a note of the fact that the device is listed for a release date of November 15, 2012, and ponders whether it was scheduled for an earlier release but stalled. 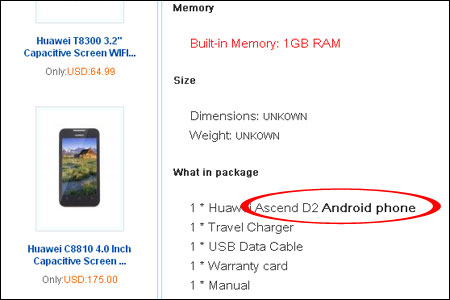 So far, nothing official has been said about the Huawei Ascend W2. Take this with a huge grain of salt, as the most suspicious part about the listing is that, under the ‘what’s in the box’ section, the retailer has put up the Android D2 (pictured above).

Supposed specifications are given below: