Huawei Ascend P7 sneaks out yet again, this time in much clearer images

We’ve had our fair amount of glimpses at the upcoming Huawei Ascend P7 but it doesn’t hurt to look at it once more. The leak-prone smartphone is set to be officially unveiled on May 7 in Paris, but it has to pass certification prior to that. And it is through China’s certification agency named TENAA that these new images have seeped out.

There are no details regarding its specifications in this leak. However, we know from prior hearsay that the Huawei Ascend P7 could kick in a 5-inch 1080p full HD display on its front surface. Moreover, it has also been said that it will come equipped with a 13MP rear camera and a whopping 8MP front snapper. 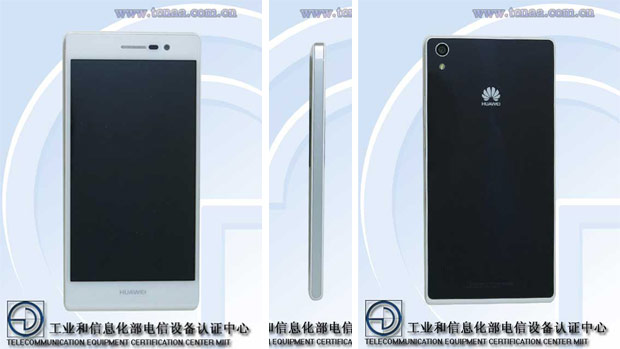 The Huawei Ascend P7 is also expected to feature a 1.6GHz quad core HiSilicon processor and 2GB worth of RAM. It will apparently ship with 16GB of storage onboard, but will also grab a microSD card slot for further storage expansions. Keeping the device going will be a 2,460mAh battery.

This phone looks like quite a significant upgrade over its predecessor which can be bought right now to experience the benefits of a 4.7-inch HD display, an 8MP rear camera and a quad core K3V2 processor. Sized at 132.65mm x 65.5mm x 6.18mm, it kicks in a 5MP webcam as well.

As its unending leaks including this one (via Unwired View) are suggesting, this isn’t the last time we’ll be looking at the Huawei Ascend P7 prior to its launch. So stay tuned.