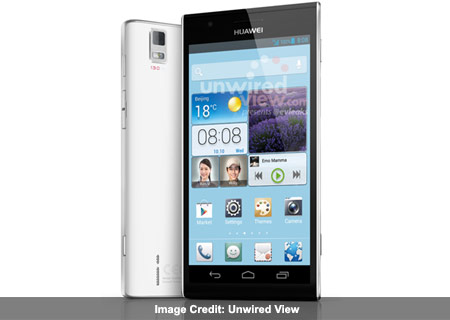 A press shot of the Huawei Ascend P2 has just been spotted in what can only be termed as yet another leak. As we await the MWC which is to take place at the end of next month, news of devices meant to be kept under wraps is continually popping up all over the place. Just like we saw in the buildup to January’s CES, another bit of the Chinese company’s plans have apparently been revealed.

The Ascend P2 which has been teased previously will come in a slim form factor. It will apparently feature a 4.5-inch HD touch screen capable of displaying images and video in 1080p resolution. There’s not much information about the phone at this point since this is just a leak, and the press shot is all we have to go by.

But what can be made out from the image is that the device will have a 13MP primary camera on the rear for clicking images and recording video. The piece of information has been dug out by Unwired View courtesy of Twitter user Evleaks, and has the device sporting 2GB of RAM, although the rest of its internals are still cast in doubt.

It will have a 3000mAh battery though, as well as a quad core processor running at 1.8GHz. And the web site reports that it will be based on ARM architecture but will be homegrown and won’t sport Tegra or Snapdragon branding. Lastly, it is expected to be made available at a fairly affordable price point.

The company, it would seem, aims to emulate the likes of HTC in broadening its smartphone reach outside of its home country. And with devices such as the Mate and the others we saw at the 2013 CES, we think it is well on its way to the challenge for the top spot with the rest of the big players in the high-end mobile phone space.

So to sum up, the Huawei Ascend P2 is the latest to have a press shot leak. According to the talk, the phone is to run on Android Jelly Bean, although the exact version hasn’t been narrowed down yet.