It has almost been a year since we first got wind of the Ascend Mate and it seems like the perfect time to introduce this phone’s successor, the Huawei Ascend Mate 2. But of course, it is not the Chinese company that has revealed the details, the handset’s pictures and some specifications have shown up on the web without an official permission.

Huaweinews.com has put up these photos that were spotted on Weibo by one of their readers. About three months ago, this website also got hold of pictures of the front bezel of the device. The images that have surfaced this time not only give us a glimpse at the gadget, but also reveals details regarding its OS, interface, model number and some other internal components. 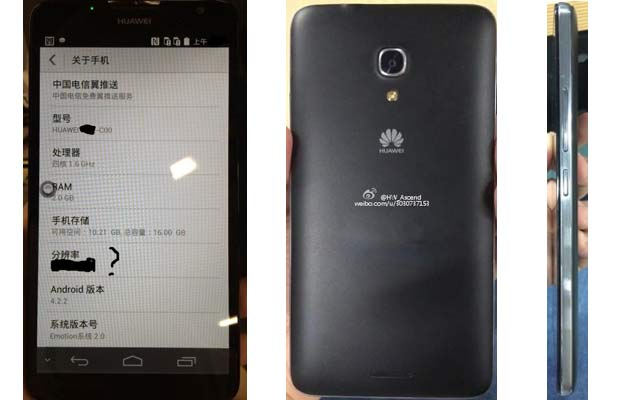 Apparently, the Ascend Mate 2 will mirror the size of its predecessor which means we can expect a 6.1-inch display on the former. And when it comes to the OS, users will be a little disappointed to know that the gadget has to make do with the Android Jelly Bean 4.2.2 OS. Nevertheless, as is the case with all Huawei devices, it will be loaded with the Emotion UI, supposedly version 2.0.

The phone is moreover rumored to employ a quad core processor sprinting at a speed of 1.6GHz and accompanied by 2GB of RAM for smooth internal working. It is likely to be capable of rendering full HD visuals in 1080p resolution and will have 16GB of onboard memory that should be expandable further.

So far, this is all that we know about the Huawei Ascend Mate 2 and we have no idea as to when the device will make its debut.