We already know that the Huawei Ascend D2 and W1 smartphones were India-bound ever since we spotted the duo on the company’s website with a coming soon label. And now that they’re also listed on an online retailer suggests that an official launch might just around the corner. The former is a high-end phone in the Android ecosystem, while the latter falls under the entry-level segment running Windows Phone 8.

Let’s start of by taking a look at the Huawei Ascend D2. The smartphone runs on the Android 4.1 Jelly Bean platform and it packs a quad core 1.5GHz Hi-Silicon K3V2 processor with 2GB of RAM, 32GB of internal storage and a 3000mAh battery, all in a 9.4mm thick form factor. One of the main highlights here is the 5-inch 1080p Super Retina LCD panel which has a pixel density of 443ppi. There’s also a 13MP camera on the rear that can capture FHD videos and images with HDR. The device has an estimated standby time of 6 days on WCDMA. 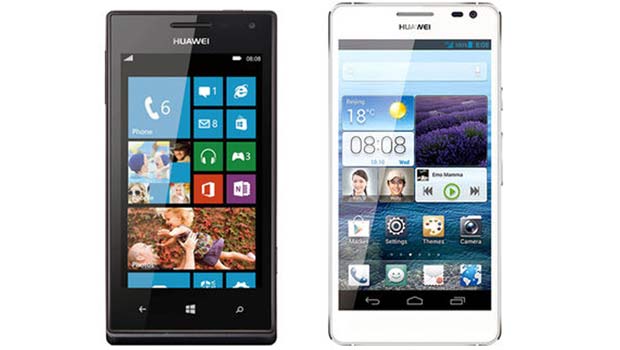 The Huawei Ascend W1 runs on the Windows Phone 8 platform with its eyes set on the entry-level segment that’s currently dominated by Nokia’s multiple handset offerings. The device touts a dual core 1.2GHz Snapdragon S4 MSM8230 processor, 512MB of RAM, a 4-inch WVGA IPS OGS touchscreen, 4GB of storage and a 5MP camera with HD recording. The key feature here is the battery which has a capacity of 1950mAh and is capable of delivering up to 630 minutes of talktime or 470 hours of standby on 3G.

While there’s no price and release date details for the Ascend D2 and W1 smartphone, we suspect that both devices will go official during mid-August which is the same time when the latest Ascend P6 will make its debut for around Rs 30,000.