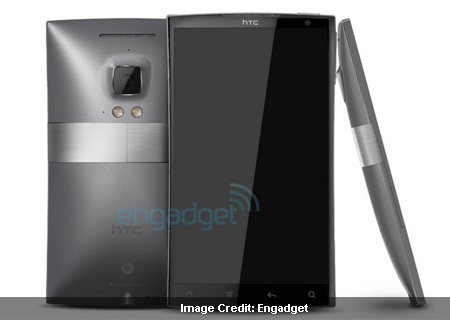 Picked straight from the rumor mill, the HTC Zeta which flashed out recently is presumed to pack in a 2.5GHz quad core processor. Well, that’s not all. The device should also come powered by Google’s latest Android OS, Ice Cream Sandwich.

Shedding some flavor into the device’s specifications, Engadget speculates the HTC Zeta to be wrapped around Qualcomm’s next generation Snapdragon APQ8064 CPU clocked at a frequency of 2.5GHz with 4 cores. To back up the high performance offering, the processor will be accompanied by 1GB of RAM. When talking about its front, the handset is presumed to sport a 4.5-inch 720p HD touchscreen, a 1.3MP camera and the 4 usual capacitive touch buttons.

Design-wise, the smartphone has a curved rear and could posses an 8MP camera with dual LED flash as well as full HD 1080p video recording capabilities. It reads at 109.8mm x 60.9mm x 9.8mm in dimensions and weighs around 5.15 ounces or 146 in grams. The handset will also come bundled with Bluetooth 4.0, 32GB onboard memory and a 1,830mAh battery. Sadly, there seems to be no expandable storage capability. Also, the device is touted to hold an updated user interface that’s most likely to be the HTC Sense UI version 4.0.

Just recently Nvidia unveiled its new quad core Tegra 3 processor and if compared to the one that’s rumored to be embedded within the HTC Zeta, the former may witness some worthy competition. Also, looking at the clock speed of the Snapdragon APQ8064 CPU, it appears to be a bit ahead of time. But, given the current smartphone requirements, there are doubtful chances of the processor getting utilized to its full potential just as yet.