HTC Volantis is said to be the next Nexus tablet with 8.9-inch display

As you probably know, HTC is said to be the brains behind the upcoming Nexus 8 tablet and it looks like the slate is being prepared under the Volantis codename, according to the latest leak. Despite multiple reports surrounding the device, not much was known. But the latest news sheds light on practically everything about the slate.

The Taiwanese OEM has been out of the tablet game for a few years now. So, it making what’s supposedly the last member of the Nexus lineup is a big deal. The HTC Volantis is internally known as the Nexus 9, but might get rebranded to 8 before launch. The reason for the former moniker is mainly because the display size is at 8.9 inches. Design-wise, the tablet looks to be a cross between the Nexus 7, Nexus 5 and iPad mini. 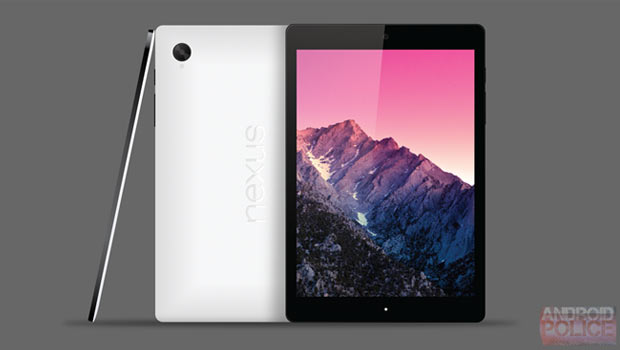 While Android Police says it’s pretty confident about the information it has received, we’re not so sure about the image which is a remake of the original to provide better clarity (the original is embedded below). Well firstly, it looks pretty fake to us and we cannot imagine HTC creating a design that resembles other products on the market. Adding to this, the slate is said to have front-facing stereo speakers which we’re assuming will be the signature Boom Sound ones, and the overall form factor will have a zero-gap aluminum construction.

Neither does the tablet look like it’s made from metal, not does it have front-facing speakers. Where specs are concerned, the device will feature a 2048 x 1440p display and a 64-bit Tegra K1 SOC based on the dual core Denver CPU with a 192 core Kepler GPU, as previously rumored. The RAM will be 2GB, while storage options will continue to follow the 16GB and 32GB tradition. The device will also have dual camera, an 8MP snapper with OIS on the rear and a 3MP shooter on the front. 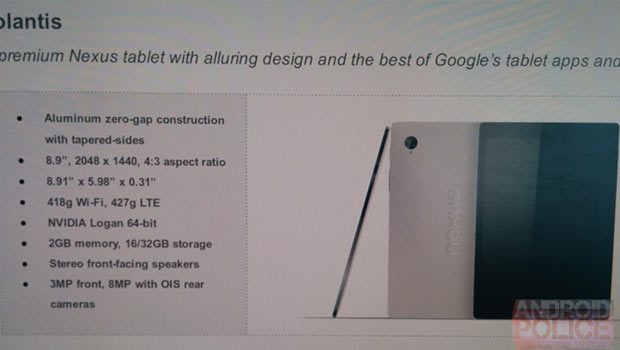 A recent report suggested that the Nexus 8 isn’t likely to go official at the Google I/O conference which is scheduled to take place in the next couple of days. Instead, it will be launched later in the year. The device might retail for around $399 with 16GB of storage and $499 for the 32GB model.