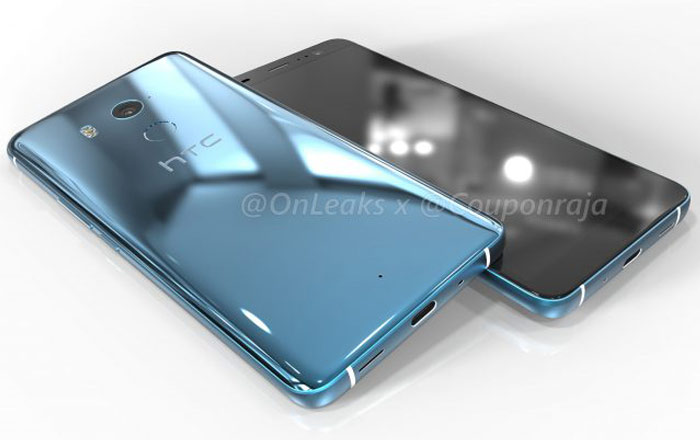 HTC’s confirmed its intentions to launch a new U series phone on November 2 via a tweet posted through its official account. The poster doesn’t give much away in terms of details, but there are plenty of leaks to fill in the details.

Most agree that HTC’s going to launch an updated version of its flagship U11 possibly called the U11 Plus. The display may see the biggest change, boasting of a 6-inch POLED screen and trendy new 18:9 aspect ratio. It may not be bezel-less though, as recently revealed renders by OnLeaks and Couponraja indicate that there could be borders at the bottom and top.

Another factor which becomes immediately obvious is how tall the U11 Plus could be. OnLeaks hints at dimensions of 158.2 x 74.6 x 9.1mm which is pretty tall and thick to boot. The phone’s bulkiness could have something to do with the 4000mAh battery possibly ticking away inside it.

HTC might let go of the 3.5mm headphone jack yet again. It’s probably not planning on adding a second camera to the back, so buyers will be greeted with a single 12MP rear camera and 8MP selfie snapper. The squeezable Edge Sense feature is also here to stay, though we’ll have to wait and see what improvements the company has made to the technology.

Other rumored specs include 4GB/6GB of RAM, HTC BoomSound, Android 8.0 Oreo, a Snapdragon 835 processor, a rear-facing fingerprint scanner, and 64GB/128GB of ROM. Stay tuned for more as and when the smartphone arrives on November 2.