The HTC U has become the subject of a massive leak which reveals a number of details about the upcoming flagship. The images appears to be sourced from a product presentation for the handset.

Going by the leak, the HTC U’s star feature will be Edge Sense. As has been rumored before, the technology lets users apply pressure to the sides of the device where sensors are located to trigger various actions like launching the camera or Sense Companion.

A series of screenshots seem to indicate that Edge Sense will let people complete tasks by squeezing for a short or long period of time. There’s a tutorial process for each and a sensitivity level page. The last notes that a proper sensitivity level lets consumers interact with the phone comfortably with a low mis-trigger rate.

Also See: HTC U Ultra goes up for sale in India

This is clearly of paramount importance given how easy it could be to make mistakes with such a setup. Moving on to the camera, the HTC U might feature tools like Real-Time HDR scene detection. It may allow individuals to see what an HDR-enhanced photo will look like in real-time. 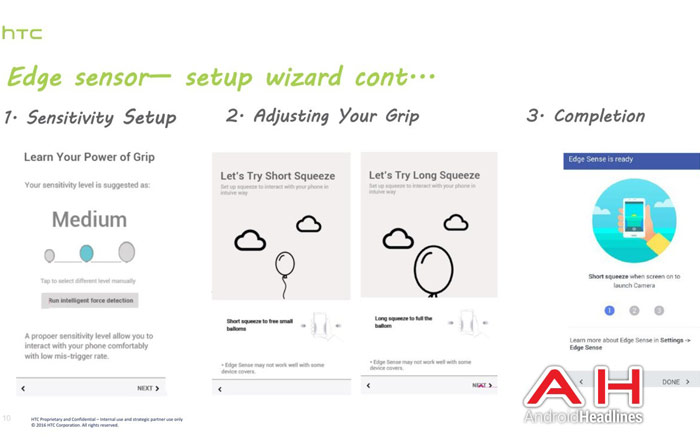 There’s also mention of the HTC flagship having advanced sound configurations such as 3D Audio for surround sound, Hi-Res Recording for lossless audio, BoomSound, and 4 microphones. It may also come with dual speakers at the top and bottom, in addition to support for the brand’s USonic tech.

A quick roundup of the alleged specs of the HTC U:

Stay tuned for more on the HTC U as and when more details emerge out of the woodwork.