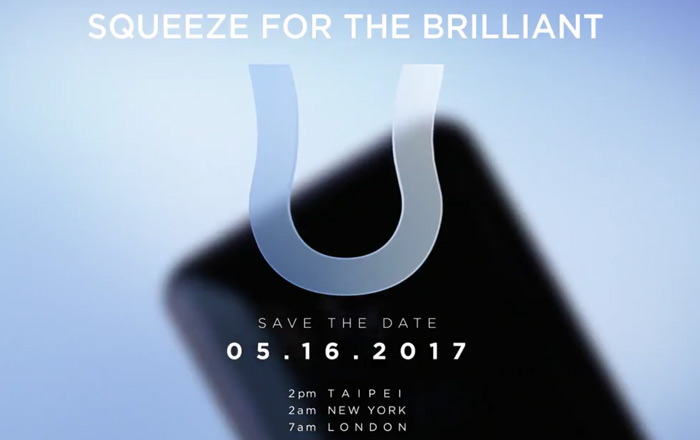 HTC has officially announced a launch event on May 16 which will see its latest flagship phone coming to light. While it hasn’t stated what the name of the smartphone is yet, the brand’s tweet featured the caption ‘Squeeze for the Brilliant U,’ a fairly obvious indication that it’ll be called the HTC U.

HTC’s tweet is accompanied by a 5-second teaser which showcases a slim phone being squeezed along its edges, a clear hint at the unique Edge Sense feature that’s been rumored for months. Even the letter U in the video gets squeezed.

HTC has also set up a launch website which features a countdown timer and images of things like a balloon and footballs being squeezed. It’s widely believed that Edge Sense will allow users to get things done by squeezing the device’s sides.

The HTC U’s metal frame has likely been furnished with sensors located on its lower half to make this possible. Screenshots which have gotten leaked indicate that the phone will detect how much pressure should ideally be applied to avoid mis-triggers and provide tutorials on a short squeeze and long squeeze.

Take a look at the expected specifications of the HTC U:

Possible applications include using a short squeeze to open up the camera app. Stay tuned for more on the handset up until it goes official on May 16.