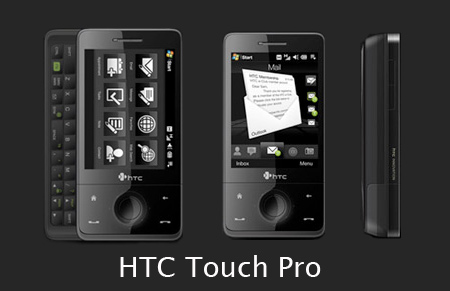 A 2.8-inch display and a built-in 3.2MP camera featuring an optical auto-focus lens are key features of the HTC Touch Pro handset.

The HTC Touch Pro also includes YouTube application, which is especially created by HTC. Thanks to this application, Touch Pro users will be able to watch variety of user generated video content and also Google Maps for mobile for mapping and traffic data.

“The HTC Touch Pro and Touch Diamond have created a new generation of HTC touch devices that make the promise of the one-hand, one-touch mobile Internet a reality,” said Peter Chou, president and CEO, HTC. “HTC Touch Pro is for those customers that demand the ease of use and enjoyment of TouchFLO 3D and want the styling of the Touch Diamond but also need the powerful mobile business experience that HTC delivers.”

Upon sliding the screen of the phone, a QWERTY keyboard is revealed that simplifies typing tasks such as composing mails, working on Microsoft Office documents etc. Further the phone comes equipped with TV-out functionality letting users to deliver the perfect PowerPoint presentation from the Touch Pro.

Some of the other features of the HTC Touch Pro handset are: