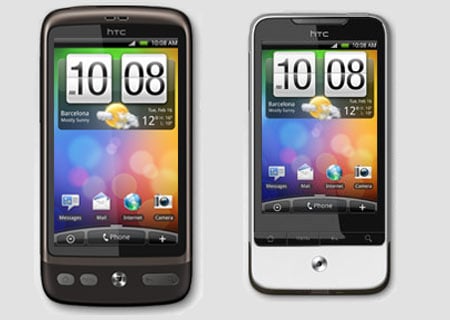 Recently HTC revealed that its HD mini phone would hit stores this April. Now the company discloses that the HTC Legend and Desire Android smartphones will now be offered with an enhanced HTC Sense experience.

The HTC Sense is noted to revolve around its three fundamental principles which are Make It Mine, Stay Close and Discover the Unexpected. The users’ interactions with all those dear to them are further heightened thanks to the inclusion of the HTC Sense experience. The can do so with the help of a new HTC application and widget called HTC Friend Stream. Social communication like Flickr, Twitter and Facebook are easily organized into one single flow of updates.

“At its essence, the mobile phone is the most personal item you have in your possession. HTC Sense was created to magnify your ability to create and define your own unique mobile experience. HTC Legend and HTC Desire take Android to another level in both substance with HTC Sense and style with HTC Legend’s revolutionary crafted aluminum uni-body design,” stated Peter Chou, chief executive officer of HTC Corporation.

Users of these handsets can also be neatly categorized into social circles like groups of friends or colleagues. The new HTC Sense experience offers a wide improvement to applications which include email client, the browser and others. There is also a new newsreader application and widget as well as a new seven-screen ‘Leap’ thumbnail view.

“HTC is a valued partner for Vodafone and has made a strong contribution to the growth of the mass market appeal of smartphones. Vodafone endeavours to offer our customers the widest and most compelling choice of smartphones and to that end the HTC Legend, the HTC Desire and the HTC HD Mini will be ranged in selected Vodafone markets across our footprint. I’m particularly pleased that through our collaboration with HTC, Vodafone customers will experience a differentiated experience on the HTC Legend which will come customised for them with pre-loaded Vodafone 360 Internet services,” explained Patrick Chomet, Group Director of Terminals for Vodafone.

The HTC Legend is specifically fashioned around the enhanced HTC Sense and portrays a unique appearance with a smooth surface formulated from a single aluminum block. The phone also includes a 3.2 inch, AMOLED HVGA display, optical joystick and a narrow button. The HTC Desire features a large 3.7 inch AMOLED WVGA display and works on a one gigahertz Snapdragon processor. The smartphone is also Adobe Flash 10.1 ready and offers users an optical joystick as well.

The Legend smartphone from HTC complete with HTC Sense is expected to enter Europe via Vodafone and the direct channel from April onwards while Asia and other places will get to experience the smartphone by early Q2 2010. The HTC Desire is scheduled to make its way by early Q2 and will unfurl in Australia via Telstra. The pricing details of the phones have not yet been disclosed by the company. Customers who possess the HTC Hero and reside in Asia and Europe can easily upgrade their handsets with the enhanced HTC Sense experience absolutely free of cost.