HTC Sense 5 coming to One X, X+, S and Butterfly as software update

The HTC Sense 5 UI will be delivered as an update to the One X, the X+, the S and the Butterfly. This should come as good news to any fans who own the aforesaid devices and don’t intend to upgrade to the company’s latest flagship. There is a small piece of subtext though; not all features of the new experience will be compatible with the older handsets.

The entire Sense 5 update saga unfolded when the Taiwanese manufacturer replied to an Israeli user’s question on Facebook about an upgrade to the new UI. The response indicates that an upgrade is being prepared for some of the company’s more capable devices. But only the global versions of the One X and X+, the One S and the Butterfly were mentioned. However, the update will not grant users a chance to try out all the new additions, apparently as a few of them depend on the One’s hardware capabilities.

But there was a certain amount of ambiguity in the official response, as it did not directly confirm that it would be Sense 5. Android Police reached out to the company for clarification and the website has received confirmation that the statement on Facebook indeed indicates that the mentioned devices will receive a taste of the newest UI in a future software update.

The latest flagship, unveiled at a hyped-up event recently, brings along some really interesting capabilities, not in the least the ability to make snippets from what would otherwise be regular images. It introduces a new type snapper for the purpose, dubbed an Ultrapixel camera. If nothing else, it is a new way to make GIFs, right? But besides this, several fresh eye-catching features have also been included such as BlinkFeed. Another to take advantage of the handset’s hardware is BoomSound, which utilizes its dual front speakers. 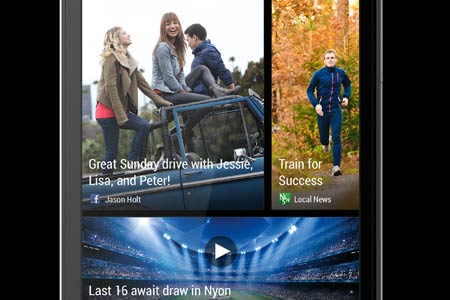 So when can users of the One X, X+, One S and the Butterfly expect this Sense 5 UI upgrade? Well, the Facebook response puts it down to the next few months, but doesn’t mention any specifics like which device will get it first and when exactly it is expected to start rolling out for the current crop of handsets from the Taiwanese company.