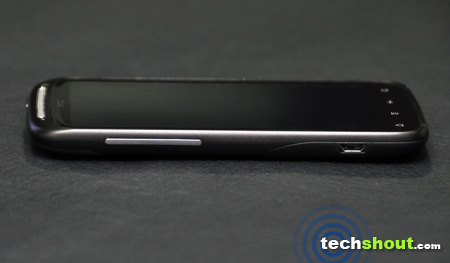 Our HTC Sensation review will take you through a tour of the classy-looking Android smartphone and reveal just what it has in store for users. Powered by a 1.2GHz dual core Qualcomm processor, we received the handset in a small and compact white package. Unboxing all of its contents was pretty quick as it dropped in with just a few essential accessories like an in-ear headset, a USB cable and a wall socket to convert it into a charger. Minimalism felt good, but we’d personally have preferred a user manual and memory card within the package as well.

The first thing we noticed about the HTC Sensation, other than its colossal screen size of course, is a dark classy appearance that’s blocked by just a hint of silver on the speaker end. The display comes with a glossy, mirror-like finish and when the phone’s flipped over, the rear panel shows off three different textures that portray a rather stylish pattern. The back feels smooth and its tri-tone appearance is somewhat appealing. Well, we’re not about to get our hearts racing just on the initial glimpse. However, if this smartphone happened to be our first Android device, we were most likely to have landed overwhelmed by its offerings. By looking at it, we were certain that the Sensation could be able to uphold its name even whilst being flaunted amongst a circle of smartphone-toting friends.

Moving on to the 4.3-inch touchscreen, the contoured glass edging provides a really good and well-fitted feel. The front of this handset is devoid of any physical buttons except for four capacitive ones just below the display. Whilst giving all the homescreen variations a try, we realized that the feature which emphasized itself the most was the animated weather tab. Although it’s not the most important thing to have on the forefront, the widget certainly possessed an impressive appearance. Overall, the interface is pretty comfortable and convenient to get accustomed to, owing to its highly responsive nature. 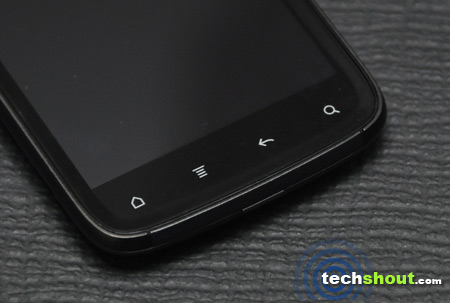 The next phase of our HTC Sensation review is the messaging function and its capabilities. For text input, it sports three switchable virtual keyboard options such as the regular QWERTY one, a feature phone-like keypad and a compact QWERTY alternative. The latter two can be used only when the screen is held in the portrait orientation. When in landscape mode, the QWERTY interface did pose to be a bit troublesome due to its ultra-sensitive nature.

As a smartphone, it is obviously geared up to offer music, videos, games, and much more to keep you engaged. And if you are a busy person but love reading, this handset may be an apt substitute for your eReader and it even weighs less than a paperback. The Sensation is equipped with a reader app, which is pre-loaded with classics like Jane Eyre, Dracula, Alice’s Adventures in Wonderland, A Tale of Two Cities, and more. Though the ‘smallest’ and even the ‘small’ font size gave us a headache at some point, they’re suitable for an overall view of the page. While the video player is nothing extraordinary, it doesn’t disappoint either, especially in the HQ mode view. The earphones kept us well entertained with its high audio quality and even offered seclusion when a break from the world was desired. The single loudspeaker wasn’t enough to knock our socks off, neither were we expecting it to get a whole room of people dancing to the beats. But in terms of being audible over regular ambient noises, it lacked a kick. Despite this, the media aspects of the HTC Sensation were pretty much on a par with our expectations.

With smartphones accommodating various innovative features, a few essential aspects get neglected sometimes. But the makers of the Sensation seem to have paid enough attention to the basics. Right after we unlocked it, the ‘Phone’ tab on the screen allowed us to make a call directly. The contacts appeared concise, yet clear and organized. Also, this handset boasts of a Smart Dial feature which does not seem anything out of the ordinary, but makes it convenient to find what you need from the phone-book. It allowed us to enter the first few digits of a number, initials of the person and first or last names and provided a host of matching results in return. Talking on a touchscreen handset seems like a concern for those who worry about their cheeks hitting all the wrong buttons. And the Sensation surprised us as we didn’t find ourselves inadvertently navigating through the interface while conversing. Furthermore, we were also satisfied with the overall calling experience.

Although most of the functions and call features were rather appealing, the 1520mAh battery didn’t impress us too much even on average usage. Pumping the juice back into it with the aid of the USB charger was a long test in patience. We high recommend that heavy users should carry along a charger or a backup power source when out of their abodes. What’s more, whilst we were working on the Sensation review, our palms always seemed to take some heat, especially when playing games. 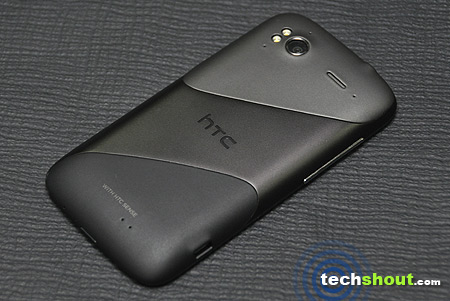 The rear facing 8MP camera captures impressive images and records clear videos in 1080p full HD as well. When zoomed to its maximum extent, the quality certainly did not let us down. The front facing VGA camera is also fairly decent. Of course, you can’t expect these images to be crystal clear with brilliant sharpness. But it seemed set to fulfill its purpose of video calling and that of a personal mirror as well.

The combination of the 1.2GHz dual core processor with 768MB of RAM and the Android Gingerbread OS compelled us to give a few games a try. Our list included Angry Birds, Fruit Ninja and the Nvidia optimized Riptide GP, which ran flawlessly. Courtesy of the display’s swift and apt response, gaming on this device was indeed a smooth and seamless experience. It may not fulfill the demands of hard-core players, but it satisfies the regular class of users to a proper extent.

Even as it offers a 4.3-inch touchscreen, the body maintains a sleek look and design.

The camera has enough potential to please avid photographers.

The pre-loaded reader comes across as a good alternative for paperbacks and eReaders, even if you aren’t ready to let go of these just yet.

The overall performance of the battery, especially the odd heating up, seems to pull the device down by a bit.

Summing it up, the HTC Sensation shows up as a decent Gingerbread powered smartphone. The Sense UI is engaging and smooth as it is, the task of navigating through the interface isn’t something that comes across as rocket science. The looks aren’t what we’d call eye-catchy, but its classy appearance makes a viable attempt to take a step away from a boringly basic black design. Nonetheless, the Sensation is worth a try and bound to get you hooked. That’s mainly why we’re giving it an 8.9 out of 10 rating. The unlocked version of this device can be picked from Amazon for a price $479.99.