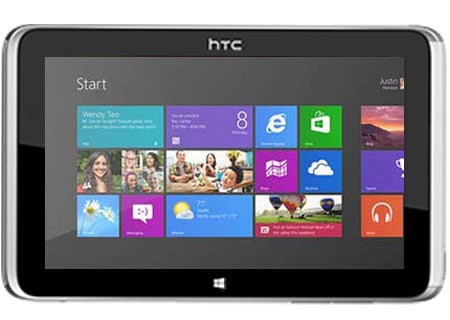 Rumor has it that the HTC R7 and R12 launch will happen sometime during Q3 of 2013 with both tablets making their debut powered by the Windows RT Blue platform. As the names suggest, these slates will come bearing 7-inch and 12-inch displays, albeit these are only codenames to indicate the screen size and OS type.

The Taiwanese manufacturer hasn’t been much involved in the tablet market with only 3 devices launched so far. The ones in question will be its first foray into the Windows PC segment. The R7 adds to the many rumors that Microsoft plans on introducing support for small-size slates much like the 7-inch Xbox Surface that was under speculation last year. Phone Arena reports based on details leaked out through a source who claims to have information on specifics, that the device will sport a full HD touch panel.

A 2.3GHz quad core Qualcomm Snapdragon 800 SOC will be carrying the load on the inside, so performance should be pretty good and there will also be 2GB of RAM which is standard for current generation Windows RT devices. A 13MP AF camera should find home on the rear, while memory is in the hands of 16GB internal storage and a microSD card slot. The R12 is said to possess the same specifications, although the screen resolution will be bumped up to 2048 x 1536 pixels.

Following numerous rumors, Microsoft finally went on the record about Windows Blue. Tami Reller, Chief Marketing Officer and Chief Financial Officer, stated that the update is expected to be commercially available later this year. And recently the company disclosed that the public preview of the upcoming OS will be rolled out during late June. We expect in-depth details on what improvements it carries and new features incorporated to surface at the Build 2013 developer conference. The video embedded below delivers an early peek at what enhancements the desktop version will proffer.

The report states that the manufacturer plans on releasing the HTC R7 and R12 tablets on October 13 which should be around the same time other devices with the latest OS go official for the holiday season.

Common specifications of both devices: