The HTC One X+ is reportedly being bumped up to Android 4.2.2 as a new software update is now rolling out. The upgrade is said to arrive over the air and users should also be able to download it through the Sync Manager application for PC. Jelly Bean 4.3 was recently released and the Taiwanese manufacturer is yet to announce whether the device in question (even its current flagship) will be updated to the newer version of Google’s mobile platform.

A changelog of the update was posted online by Twitter user @baadnwz. According to the details listed, the new release packs in various enhancements and bug fixes. So let’s get started – With Android 4.2.2, the HTC One X+ will now feature the company’s latest Sense 5 UI and BlinkFeed. The phone will have a new lockscreen style which supports widgets and the battery level can be displayed in the status bar. Moreover, users will be able to assign up to 12 default settings in the quick settings panel, and the exposure as well as focus can be locked in the camera application. Last on the list are visualization for the music player and Video Highlights. 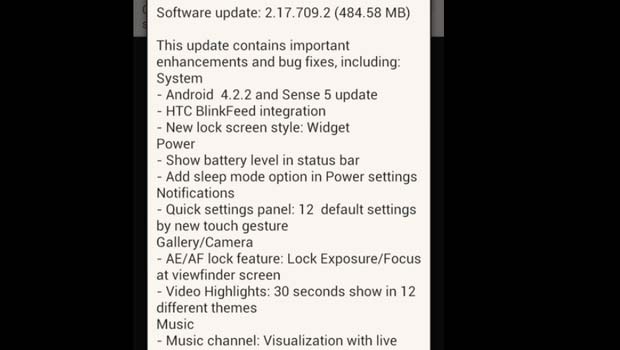 The HTC One X+ is merely an updated version of the original carrying a beefier processor, a larger battery and more internal memory. The device is 8.9mm thick and it tips the scales at 135 grams. The front is layered with a 4.7-inch super LCD 2 HD panel with Gorilla Glass 2, while the rear sports an 8MP snapper and an LED flash. Coming to the innards, the handset is fueled by a 2100mAh battery. There’s a quad core Nvidia Tegra 3 processor clocked at 1.7GHz doing the heavy lifting, while memory needs are taken care of by 1GB RAM and 64GB flash storage.

The Android 4.2.2 Jelly Bean software update for the HTC One X+ goes by version number 2.17.709.2. It’s 484.58MB in size and arrives via OTA delivery. Those without a data plan or with no access to Wi-Fi should be able to get the firmware through the Sync Manager application on PC.