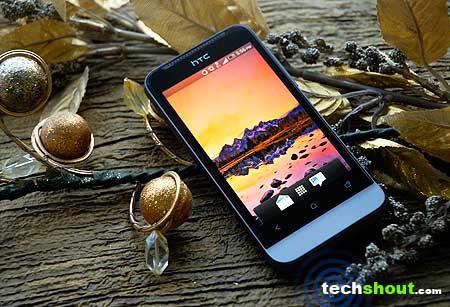 The HTC One V is amongst the latest Android powered smartphones with which we’re eager to go hands-on for a review. Being the Taiwanese-based manufacturer’s most affordable handset amongst the One series, which comprises of the flagship X variant and the S version, this treat is also accompanied by the HTC Sense 4.0 UI that’s layered over the default home launcher of the Ice Cream Sandwich platform. From an enhanced interface for swift navigation, to new and improved features for entertainment buffs and much more, it proffers all these into a single software bundle. The handset falls into the low-end category with a decent set of specifications that seem enough to plough through daily tasks and even run the most demanding applications. Read on if you’re eager to know more.

Like we said before, the One V falls under the low-end phone category. Well, the company doesn’t seem to be treating it like just any basic smartphone. An ‘amazing camera’ as well as ‘rich and authentic’ sound is what the device is said to pack in. These claims are honored by the dedicated imaging chip and the Beats Audio enhancement, respectively. Sitting pretty on the front is the 3.7-inch WVGA Super LCD 2 touchscreen proffering a resolution of 480 x 800 pixels. The display is coated with optical lamination for a wider viewing angle and reduced reflections. Running the show here is a Qualcomm Snapdragon S3 processor that’s clocked at 1GHz. The CPU is backed by 512MB of RAM and a total built-in memory of 4GB out of which 1GB is user-available. A microSD expansion slot takes care of higher hoarding needs through support for up to 32GB of additional memory. 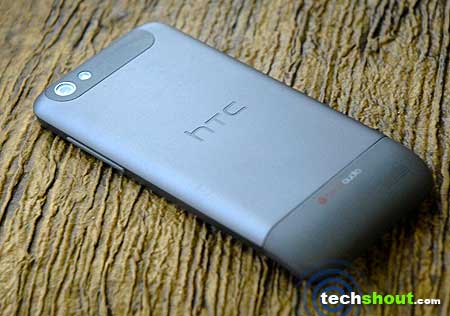 A 5MP f/2.0 camera with a 28mm wide angle lens and a BSI sensor is thrown in bearing attributes such as super fast startup and AF, as well as high quality captures while recording 720p HD videos. These are backed by the custom new HTC ImageChip and the ImageSense technology. For connectivity, the handset incorporates Wi-Fi 802.11 b/g/n standards, Bluetooth 4.0 and CDMA as well as HSPA network support, while the micro-USB port caters to wired data transfer capabilities. Then there are various sensors such as the G-sensor, proximity sensor and ambient light sensor. A weight of 115 grams is what the HTC One V carries after incorporating all aforementioned components including the non-removable 1500mAh Li-ion battery. 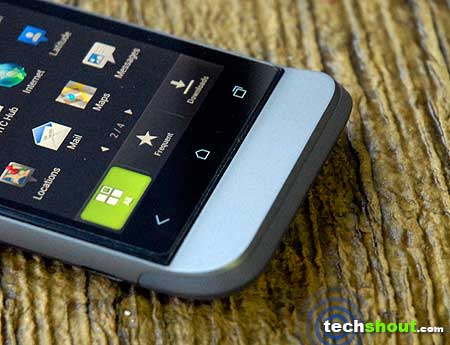 Unlike most handsets which rolled out from the Taiwan-based manufacturer over the past year, the HTC One V flaunts a curved-chin design, a form factor previously seen on the HTC Hero and Legend smartphones that made their debut back in 2009 and 2010, respectively. The metal unibody build prevails on this handset. A durable appearance is portrayed through the silvery-gray shade and smooth finish on the classic aluminum construction. While the display looks like it’s been fitted into a fancy protective case, churning out the curved-chin form factor would have given the handset a more compact look and feel. Unlike the Hero and Legend, this one doesn’t have any sort of physical button on its lower end. 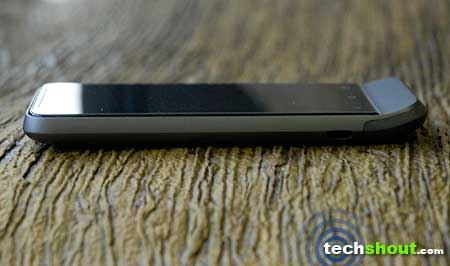 Resting just above the display is the HTC branding that’s accompanied by the headset and the proximity sensor. And guess what? There isn’t any front-facing camera. The lower end of the screen flaunts 3 touch-sensitive buttons for various operations such as back, home and recent apps. Head right and you’ll find the volume keys, while the power button, 3.5mm headphone jack and notification light are situated on the top. The micro-USB port for charging and data transfer can be found on the left edge. On the flipside is another HTC stamp followed by the 5MP camera and flash on the upper panel and the Beats Audio branding on the lower removable panel. The extra bulge on the lower end plays house to important components, namely the loudspeaker, SIM card slot and the microSD bay. The battery is embedded within the device’s 9.24mm slim profile. 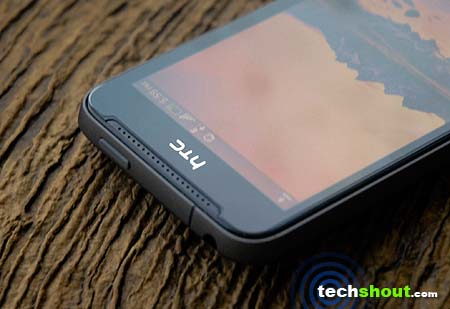 The Sense 4 UI is well implemented over the Android 4.0.3 platform. Menus load quickly, while navigating through the interface is smooth and swift. The touch sensor is really responsive and the display is crisp and portrays images as well as videos in bright vivid colors. The camera being the highlight of the smartphone isn’t quite what we’re expecting. Images captured are bright but lack crispness. And the flash tends to mess up low-light shots by blurring out a small portion of the image. However, the pre-loaded effects had us while away some time with the camera app. The option to enable or disable the Beats Audio enhancement arises whenever media is accessed through the default apps. Compared to the Dolby Mobile attribute, the one from Dr. Dre isn’t all that impressive. 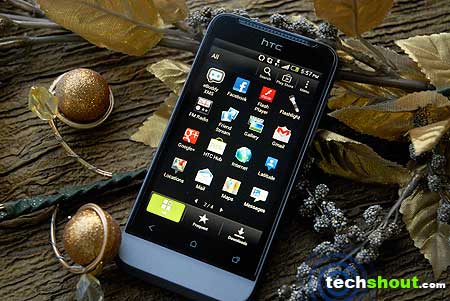 We played various types of songs from different genres and noticed nothing more than a slight boost in output levels. Now, we’re not saying that the sound quality isn’t any good. You could say its, well, on par with most technologies implemented by the competition. The combination of the 1GHz Qualcomm processor with the Adreno 205 GPU makes playing graphically enriched games a piece of cake. However, demanding games like Galaxies on Fire HD tend to lag. The AnTuTu benchmark application derived a score of 2703 for the HTC One V and positioned it a little higher than the year-old LG Optimus Black, but lower than the Samsung Galaxy S. As for battery life, you can expect the phone to run for an entire day on moderate usage. Around 5 and half hours of web browsing over Wi-Fi is easily achievable on a single charge.

A beautiful-looking device crafted to meet daily requirements and entertainment needs is precisely what the HTC One V is all about.

The curved-chin design makes it really convenient to get a good grip onto the handset while operating in landscape mode.

The Sense 4.0 UI has indeed gone through an overhaul and is quite smooth to navigate around. But some things always stay the same. Take the calendar-like digital clock w and the lock screen for instance.

The Beats Audio enhancement doesn’t quite deliver the ‘rich and authentic’ sound experience as the company states. In fact, the difference is barely noticeable on most tracks, disregarding their type of genre.

The camera is amongst the handset’s highlighted features, so why isn’t there a dedicated capture button? Moreover, images snapped up lacked crispness and those captured while recording videos appeared faded and blurred in cases of moving objects.

No matter how fast or how much better smartphones get, the sudden, and very annoying, lag in the Android UI will still persist.

We seem to be missing a front-facing camera. No wait; there never was one.

And so we come to the bottom line. Would we buy the HTC One V and proudly flaunt it around with claims the company has advertised? Well, probably not. All in all, the handset is one neat phone. It looks good, operates well, packs in a wide catalog of features and comes at a decent price tag. We’re giving it an 8 out of 10 rating for the fairly good show it puts up. So how much does it cost? The handset can be picked up for around $290 in the US or approximately Rs. 17,500 in India.