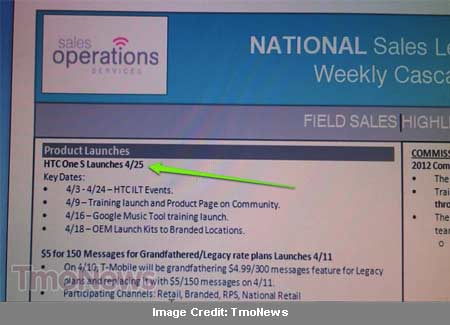 It seems like the One series smartphones are in no mood to move away from the limelight, considering that they’re making headlines frequently, the latest being the rumor about the upcoming availability of the T-Mobile HTC One S. And the device seems all set to make its debut on April 25.

Apparently, TmoNews has managed to lay its hands on a picture that confirms the release date. Also, another post on the website claims that the employees of the carrier in question are supposedly preparing for the launch of the One S. Running the Android Ice Cream Sandwich platform, it boasts of utilizing the latest HTC Sense user interface. The embedded 1.5GHz dual core processor and 1GB RAM allow users to launch multiple operations at once.

This HTC device measures 130.9 x 65 x 7.8 millimeters, and tips the scale at about 119.5 grams. The front panel happens to be dominated by a 4.3-inch touchscreen that should render clear visuals in 540 x 960p resolutions. On the media player front, the Dr. Dre certified phone extends support to most audio and video formats including AAC AMR, WAV, MP3, MP4, 3GP, WMV and many more. 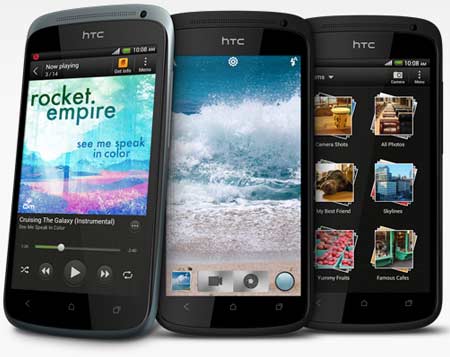 Featuring 16GB onboard memory, the smartphone comes equipped with an 8MP camera featuring HTC ImageSense, LED flash, auto focus and 1080p HD video recording capability amongst others. It is fitted with a dedicated imaging chip, and lets users capture still shots while shooting videos. This S variant also possesses a front-facing VGA webcam to facilitate video conferencing on the move.

If the leaked photo posted above is to be believed, T-Mobile will be launching the HTC One S on April 25. But the network provider is yet to officially confirm the release date and price of this smartphone.