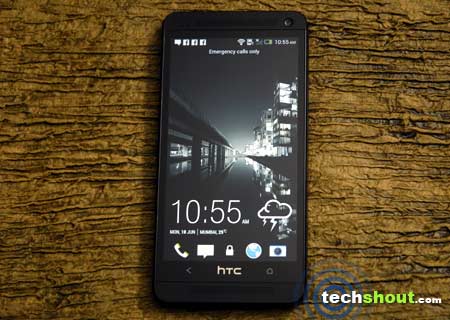 We’re about to spend some quality time with the HTC One to deliver an in-depth review of the flagship’s pros and cons. The past year hasn’t quite been the best for the Taiwanese manufacturer where sales are concerned. Nevertheless, the company still managed to produce marvelous smartphones, namely the One X and Butterfly (here’s our review). And it’s not going to be calling it quits anytime soon. Rather, the giant has hit the market hard with this new iteration, despite delays. So is the impact enough to leave a mark, or is all the hype surrounding it a product of early anticipation? Join us as we find out. 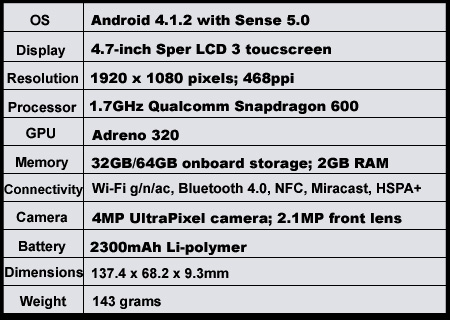 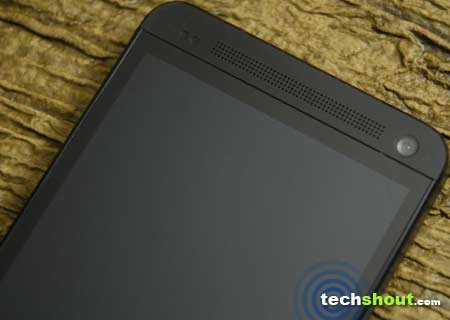 Bye plastic, hello metal. Yes, that’s right – The One isn’t made out of polycarbonate like previous generation smartphones. Instead, the company has adopted a new design approach involving an aluminum shell. They’re calling it zero gap construction which aims to deliver a seamless unibody appearance, sans any gaps between the casing. We must say, HTC has nailed it on the design front. The handset basically features an arch-shaped rear panel like we seen in the 8X (read our review), owing to which, the edges are tapered and slimmer than the center. This not only delivers an elegant appearance, but is quite comfortable to hold.

The only downside of the form factor is that you won’t be able to access the battery. And here’s the worst part – there’s no memory expansion slot, unless of course you live in China and have the dual SIM variant that sports a microSD card bay. Nevertheless, 32GB and 64GB storage options are being presented, albeit user-available memory will be much lesser after the OS and pre-loaded apps take their share. You’ll also get the standard 25GB of free Dropbox storage for 2 years. 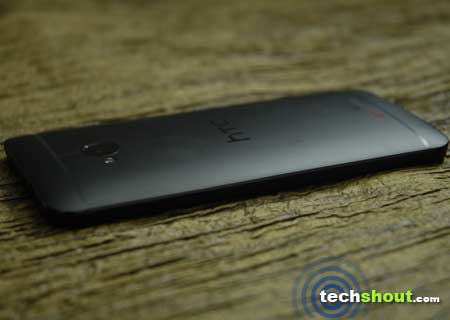 At its thickest point, the phone measures 9.3mm and the overall weight is not more than 143 grams. Fitted between 2 aluminum strips on the front is a Corning Gorilla Glass 2 sheet which nests the 4.7-inch Super LCD 3 panel that proffers 1080p resolution and 468ppi pixel density, dual capacitive touch buttons and the HTC logo. The aluminum pieces are fitted with a stereo speaker each, while the upper one has a front facing camera as well as a couple of sensors and a notification light that are hidden under the speaker grille.

Flip over to the rear and you’ll be greeted by a large camera housing and an LED flash on the upper body, the company’s logo with a glossy finish at the center and the Beats Audio branding on the lower portion which is a usual sight on phones from the Taiwanese manufacturer. What we love the most about the aluminum shell apart from its industrial design is that it isn’t smudge-friendly, giving you a clean sight to gaze upon at all times. Where the sides are concerned, the power button (which doubles as an IR blaster) and headphone jack can be found on top, the microUSB port is on the bottom and the microSIM tray is located on the left, while the right flaunts the volume rockers with a spun-metal finish like the one seen on the Butterfly. 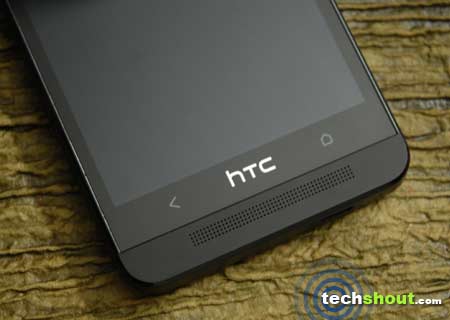 We’re going to cut to the chase – Sense has gotten a little more sensible in the latest version. The HTC One is the first to come with the new generation UI and we’re certainly pleased with the enhancements it brings along. But there’s still that feel of incompleteness. Firstly, toggles which make turning radios and features on or off haven’t been implemented in the drop-down notifications menu. This basically means that you’re going to have to enter settings to activate and disable stuff or place shortcuts on the desktop which take up unnecessary space.

BlinkFeed is a really good attribute which brings your social network feeds and other content from various news sources straight to your homescreen, but it isn’t made for everyone. And if you’re not a fan, well, there’s nothing you can do to disable or get rid of it. Apart from not configuring it at all, the only other method we could think of is to avoid swiping in its direction. A noteworthy element in the launcher is that there’s an option to hide applications from the app drawer. So that’s an easy goodbye to pesky bloatware. The lack of a physical menu button urges various applications to bring up an on-screen menu key. This takes up a small portion of the screen which is already a tad smaller than the ones employed by competitors. 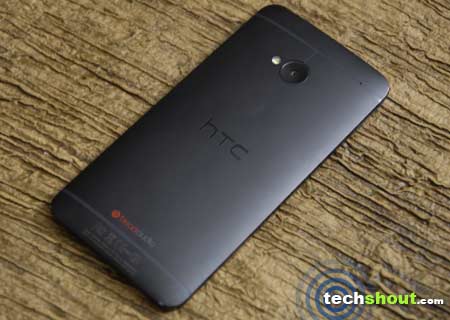 When we reviewed the Butterfly, the display caught our attention most of all. The Super LCD 3 screen was certainly a feast to the eyes and that very same panel is featured in the HTC One. It has the highest pixel density (461ppi) in the 4.7-inch segment and is definitely amongst the most spectacular mobile displays we’ve gazed upon. Visuals are bright as well as vivid and every fine detail is showcased with a realistic feel. The viewing angles are pretty great too, and visibility under sunlight is acceptable and also much better than on the aforementioned handset.

So visuals are basically best in class – What about audio quality? Beats, as you probably know, enhances the sound output, but we find it doing nothing more than boosting the volume and throwing in a little stereo widening. Nevertheless, it does make a difference whilst listening to music with earphones plugged in. What audiophiles will truly enjoy are the BoomSound stereo speakers on the front. With built-in amplifiers, the audio output is pretty loud. And by that we don’t mean noisy. Instead, you’ll be able to hear every drum beat in a rock song.

Before we go on, let’s take a look at what the UltraPixel camera really is. According to the company, the snapper is capable of capturing more light than conventional smartphone cameras, approximately 300% extra than most 13MP shooters. This is made possible owing to the large 2.0µm pixel size. Additionally, the new technology focuses primarily on image quality with a bigger pixel size. As most are aware, the sensor is only of 4 megapixels. The main reason for the low MP count is the outcome of having larger pixels which occupy more space than usual. Accompanying the new generation camera is ImageChip 2 and OIS technologies. 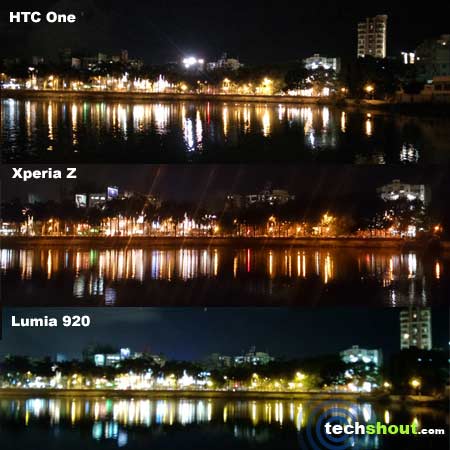 Assuming you’ve got a fair understanding of the technologies adopted here, we’re going to move on to the default camera app. The interface is pretty much the same we’ve seen in previous HTC smartphones, but there have been a few modifications to make it blend with the new Sense UI. Now, the thought running through your head is likely to be – how is a 4MP camera going to match higher resolution shooters? For starters, the lens is almost at par with the low-light capabilities of the Lumia 920 (read our review). 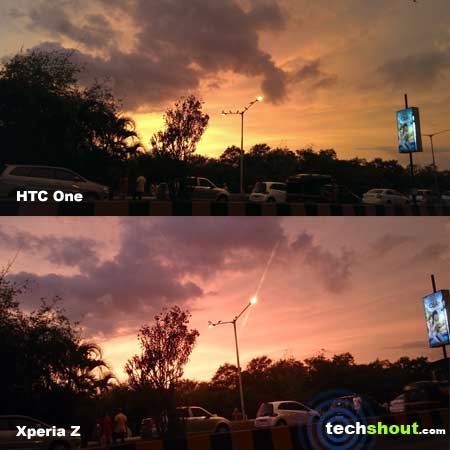 As advertised, the snapper can capture a high amount of light and it outperforms the Xperia Z (hands-on here) as well as the Galaxy S3 (read our review) in low-light imagery. The embedded sample images say it all. Quality-wise, the color reproduction is definitely something to praise. Pictures appeared vivid and beautiful, but fall short when it comes down to producing detailed results. Like its larger sibling, this camera supports slow-motion recording and 60fps 720p video capture. 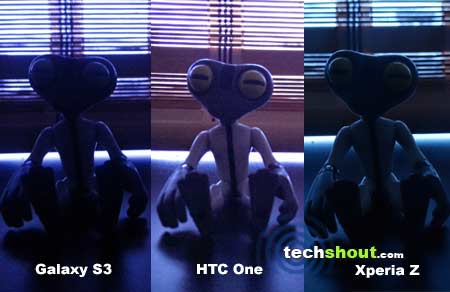 Additionally, it also tags along hardware based HDR support for video on the rear and front snappers. Speaking of which, the company has followed the usual tradition of having a wide angle lens on the front, a 2.1MP shooter in this case. Lastly, the video recording quality is quite nice. Visuals are crisp and audio is enjoyable even in loud scenarios.

The combination of four Krait 300 cores and the Adreno 320 GPU in the Snapdragon 600 SOC are tough to beat. Sheer processing power is all that it has to offer where even the toughest of games and applications aren’t capable of taking full advantage of it as yet. The smartphone takes around 7 seconds to start up with Fast Boot enabled, which is sort of a hibernation mode. And with the feature disabled, booting the phone can take as long as 30 seconds. 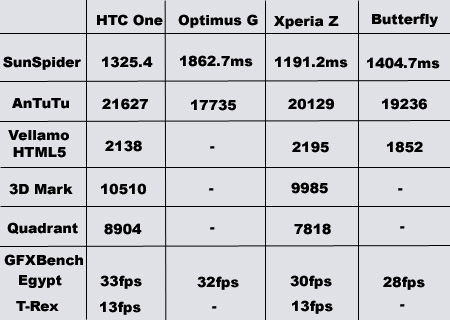 Although the HTC One has a newer processor compared to the Xperia Z, they’re pretty much at par with each other where performance is concerned. Coming to activity life, the 2300mAh battery is capable of giving you an entire day’s worth of moderate usage. With the airplane mode turned on and the brightness set to 50%, we played a 1080p FHD video on loop and the outcome was beyond our expectations with over 8.5 hours of playback. Intense gaming on the other hand got us only 4 hours of playtime.

The latest flagship is certainly a marvel to gaze upon. It’s slim, compact and the company has made the best use of space.

The 1080p Super LCD 3 panel is the best in its class, delivering crisp details, realistic visuals and brilliant color reproduction.

We’ve seen and used smartphones with really loud speakers, but never have they been as crisp and clear as the BoomSound speakers on this piece of hardware.

The lack of a microSD card slot could urge potential buyers to look elsewhere for a new companion.

Sense 5 has improved, but at the same time, it isn’t as close to perfection as the smartphone is.

We’ve got a lot to praise for the HTC One – It’s certainly one of the best we’ve reviewed over the year, but then again, it’s not entirely perfect. Enhancements such as BlinkFeed can be power hungry and not everyone is likely to be very fond of it. And as we’ve mentioned earlier, the downside is that it cannot be turned off. Then there are memory constraints as well, since 32GB or 64GB of internal storage might not be enough for some. But if one thing’s certain, this flagship doesn’t just have a fighting chance against other smartphone giants out there, it can clearly blow the competition away. For the respect it has earned from us, we’re giving it a 4.75 out of 5 rating.