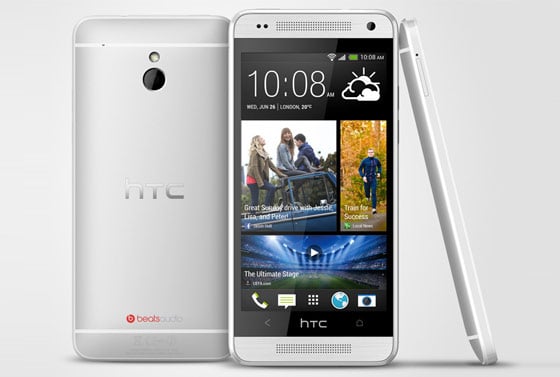 The HTC One mini has been announced by the Taiwanese manufacturer which seems to have taken a leaf out of Samsung’s book by delivering a trimmed down version of its flagship device. This newest HTC phone features a smaller 4.3-inch 720p display, an Ultrapixel camera and pruned features, but it still retains most of the design and software traits of its original. Price and release date details of it however aren’t out as yet.

The handset is sized at 132mm x 63.2mm x 9.25mm, as opposed to the 137.4mm x 68.2mm x 9.3mm dimensions of its parent phone. Its 4.3 inches worth of screen estate is able to produce its visuals in HD resolution at 341ppi. It has been blessed with 16GB worth of internal storage memory, but this device too doesn’t grab hold of a microSD card slot. The HTC One mini houses a 1,800mAh Li-Polymer non-removable battery inside its shell.

The SoC which powers it is a Qualcomm Snapdragon 400 chipset that features a 1.4GHz dual core CPU and an Adreno 305 GPU. Furthermore, 1GB of RAM has been placed inside the HTC One mini. It will come equipped with Android 4.2 out of the box, and will of course feature a coat of the company’s very own Sense 5 user interface. BoomSound for enhanced audio output and Blinkfeed for simplified social feeds are some of its other attributes.

The camera on the HTC One mini is an Ultrapixel one which despite its 4MP sensor delivers excellent results, especially under poorly lit conditions. It is also capable of capturing 1080p videos at 30fps. The front of the device on the other hand, sports a 1.6MP BSI sensor offering 720p video recording capabilities.

There’s no word out right now on when the One mini will be landing in stores and at what price. But our readers can expect details on this to pop up soon.