We’ve already seen alleged images of the HTC One Max leak out a few of times before. Well, there’s always room for one more. Also, a launch timeframe has been mentioned in the rumor which pegs the device’s debut for the end of October. So, will we see it in Berlin at the IFA 2013? That’s still a possibility and various other devices from the Taiwanese manufacturer including tablets and smartphones, should accompany it.

The latest pictures of the phablet, courtesy of ePrice, highlight a highly anticipated component, a fingerprint reader. This feature has been speculated from a long time now and it’s expected to be placed on the rear panel. The first leaked images of the HTC Max were only of the front. The second time, however, were alleged press renders which have been deemed fake as no sensor was shown on the rear. Like they say, three’s a charm, pictures uploaded by ePrice show of a black sensor just below the camera which is probably for fingerprint recognition. 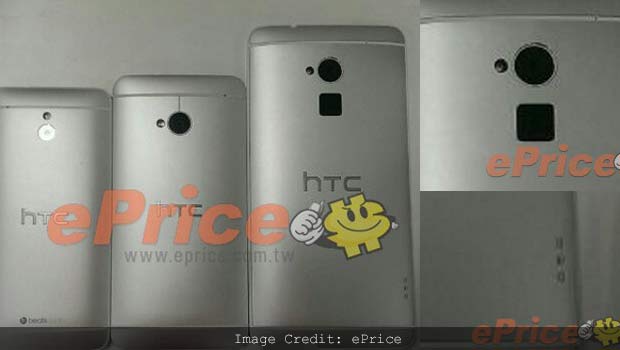 And that’s not all – There are 3 contact on the lower right corner which suggest that the company could incorporate wireless charging for the HTC One Max. Where other specifications are concerned, the handset will house a 2.3GHz Qualcomm Snapdragon 800 processor, 2GB of RAM, 16GB of memory, a 5.9-inch full HD and the UltraPixel camera. It should launch with Android 4.3 and Sense 5.5.

The report notes that the HTC One Max isn’t likely to show up before October, but we’re still hoping to see it at the IFA.