HTC One Max in the flesh: Leaked photos

We’ve heard of it in rumors and know its specs and now finally, we’re getting to see the HTC One Max in the flesh as alleged pictures of the large smartphone have hit the internet hard. Every past leak regarding new additions to the 2013 HTC One series has been spot on, including the mini and Google Play variants. And with today’s report, the existence of the phablet version is all the more convincing.

The HTC One Max is like its mini counterpart, a mere variant of the original with modified hardware, but an identical design. Well, this is what we assumed at first. Thanks to the leaked images, we’ve now learnt that the handset will feature the same form factor, but will flaunt a extremely narrow bezel at the edges. The front dons dual Boom Sound stereo speakers, a 2.1MP camera and a 5.9-inch full HD touchscreen, while the rear sports the UltraPixel snapper. The innards are where the major changes have occurred. Instead of a Snapdragon 600 SOC, the phone will run on the Snapdragon 800 clocked at 2.3GHz. 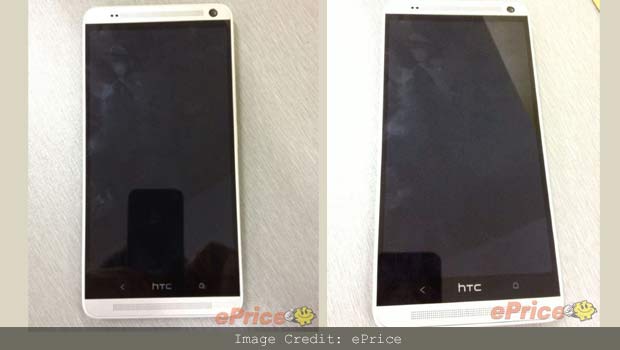 There will be 2GB of RAM and 16GB of storage with memory expansion. The HTC One Max will gain steam from a 3300mAh battery which is non-replaceable. Like the original, the phablet version will be given the same dual SIM treatment along with a removable back panel. ePrice also notes the possibility of the HTC One Max having a fingerprint sensor and stylus support.

Based on the details provided, the One Max is currently being tested in mainland China and it’s expected to arrive in three different variants for specific carriers. There’s yet no word on an official launch and considering that the phone is speculated to rock Android 5.0 out of the box, we’ve estimating a late October or early December unveiling.