HTC One M9 moniker confirmed, A53 leaked as yet another top-tier Desire smartphone

It’s more or less confirmed that the HTC One M9 moniker will be used for the company’s upcoming flagship smartphone. And we could see yet another Desire handset make its debut next month as a device with the model number A53 has been leaked as well.

Let’s start with the new Desire phone – Leakster Upleaks is once again the source of the information on the HTC handset. The model number A53 isn’t very far from the A55 which has been leaked in detail already. And we’re assuming that both handsets will be mere variants. That cannot be confirmed mainly because we don’t know what screen size the company will use for the former, while the latter is said to carry a 5.5-inch WQHD panel.

What both handsets have in common is that they will be powered by a 2GHz octa core 64-bit MediaTek processor and offer Android 5.0 Lollipop with the Sense 7 UI out of the box. The A53 could very well be a toned-down version of the A55 which will hold flagship status in the Desire lineup and we’ve seen the company use a similar strategy with the Desire 820 and 826 handsets.

Also read: HTC One M8i also leaks in full detail, not much different from current flagship

Other known features of the device include 2GB RAM, 16GB storage, a 13MP rear camera and an UltraPixel front shooter on premium model or a 13MP snapper on normal version. Coming to the One M9, TechTastic spotted the branding in the source code of HTC’s website where a link to the flagship’s product page was also visible (see image below). 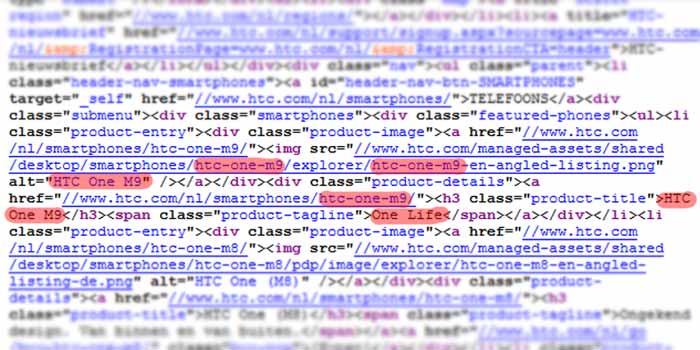 Here’s everything we know about the HTC One M9’s specs:

The HTC One M9 Hima is scheduled to go official on March 1 and we could see the A53 also make its debut at the same time. The latter will be exclusive to Asia carrying dual SIM support.