Talks about the upcoming HTC One M9 flagship codenamed Hima are hot at the moment, and new leaks are popping up every now and then. The latest one among them again highlights the specs of the handset which are not much different from the ones that have been leaked in the past.

The trustworthy AnTuTu database (via Upleaks) is the source this time around, and one thing which it clears up is that the company won’t be infusing its own Ultrapixel technology into the HTC One M9 smartphone. Leaks prior to this had kept things vague by saying that either the 4MP Ultrapixel camera or a 13MP snapper will be placed on the front surface of the Hima. 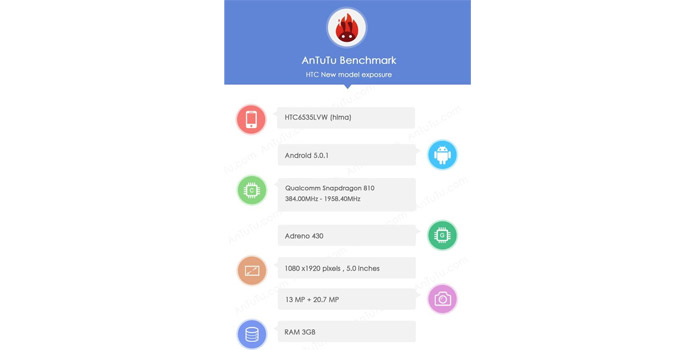 However, the specs sheet which you’re seeing up there tells us that the latter is what HTC has chosen to go for. Like we said, the other components are in line with previous leaks regarding the handset. The next-gen handset is expected to ship with a 5-inch 1080p full HD display, while running the Android 5.0.1 Lollipop OS layered with the Sense 7.0 user interface.

The octa core Snapdragon 810 processor will be powering its operations, taking assistance from 3GB of RAM and an Adreno 430 GPU. The main camera on the One M9 smartphone is being said to be a 20.7MP unit.

Here’s a short look at all the leaked specs of the HTC One M9:

Officially, nothing about the HTC One M9 (Hima) has been said till date, but we’re guessing its launch will take place sometime in March 2015.