Guess who’s joined the bling train? It’s no use pretending that companies have not been going for gold with renewed enthusiasm ever since Apple announced the iPhone 5S in its gold avatar. But hush, don’t bother saying this to Samsung. The company will get all defensive and hit you with its golden history. It’s HTC’s turn now with the gold edition One which has been announced in limited numbers. 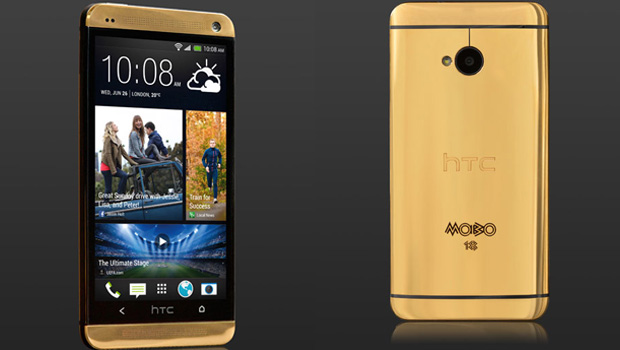 Valued at £2,750, HTC has had only five of these created in celebration of the MOBO (Music of Black Origin) Awards’ 18th anniversary. The Taiwanese company will present one of the special edition devices to the winner of the Best Newcomer category at the awards ceremony which will be held on October 19 at Glasgow, Scotland.

HTC has yet to announce how it plans to distribute the four remaining gold One handsets. Contest giveaways perhaps? We’ll update this story as soon as we hear word on the same. As for the device itself, it is coated in 18-carat gold and features a ‘MOBO 18’ etching on its back panel.

If your pockets run deep and you don’t want to wait around to see how you can lay hands on one, Goldgenie will sell you the smartphone in 24-carat gold. The price starts at £1,580 and for some more cash not running up to £2,000, you can get in platinum or rose gold too.

Looks like the Finnish company forgot about its Oro and C3-01 Gold Edition.