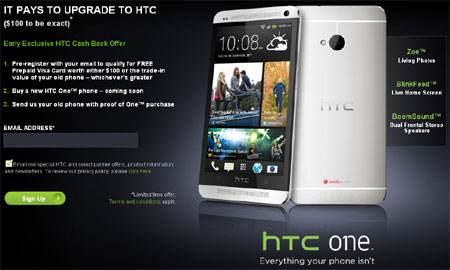 The HTC One is being offered with a trade-up promotion, under the terms of which, users who upgrade stand to receive $100 or more. But it is not quite that direct. Early adopters won’t be given the money in the form of a printed Benjamin, but will be entitled to a prepaid Visa card instead and this involves shipping their old phone to the company.

This early exclusive cash back offer for the One, which is only available in the US, requires interested customers to pre-register with a valid e-mail address. When the phone is launched, people will have to purchase it from any of the various avenues that the company has specified such as AT&T, T-Mobile, Sprint and Best Buy. Once they have done this, they’ll have to send in their old device with proof of purchase of the new handset.

This registration runs only until March 12, 2013 and trade-in phones are subject to certain criteria in order for owners to qualify for the program. Users will have until April 30, 2013 to mail in their old devices with either a copy of their UPC or a receipt (or an invoice) which shows the IMEI number. Once the necessary paperwork has been processed, users can expect their free prepaid Visa card within 60 days, the value of which will be $100 or the actual trade-in value, whichever is greater.

After being widely speculated under the M7 moniker, the device was finally made official at the company’s February 20 unveiling. Soon after, many carriers began announcing plans to bring it to their networks and we even got a price and rough expectation date in the UK through Clove.

Let’s take a quick look at its main highlights. It has a 4.7-inch, full HD display and will be one of the first to make use of the Qualcomm Snapdragon 600, a quad core chip running at 1.7GHz. Android Jelly Bean with Sense 5 will make up a main part of the user experience, but there’s also Zoe, BlinkFeed and BoomSound adding to the fresh perspective. 2GB of RAM, an Ultrapixel camera and a host of other features are packed into the handset.

Those who want to get in on the HTC One $100 promotion have just a little over two weeks’ time to do so. And even though carriers in the country are yet to announce respective release dates, CNET‘s Scott Webster thinks it will be soon, considering the window during which the trade-in program runs.