HTC’s Ocean Note AKA U Ultra has been the subject of numerous reports these past few weeks in the run-up to the company’s January 12 ‘For U’ event. The handset has now been leaked in a range of live photos showing off the phone from every angle.

The most surprising thing about the images is the secondary display sitting above the screen of the alleged HTC Ocean Note. The ticker looks remarkably similar to the one found on the LG V10 and V20. It seems to be able to perform the same functions as well.

Based on the snapshots, the U Ultra will be able to showcase the date and time, recently or frequently used apps, and notifications. We’ll have to wait and see whether the brand adds its own spin to the smaller screen in order to distinguish the panel from others.

Another notable change comes from the decidedly Samsung-esque design language. Instead of sticking to an all-metal look, HTC appears to have switched to glass layers on the front and back which are held together by an aluminum frame. The photos also serve to verify previous rumors that the company had done away with the 3.5mm headphone jack. 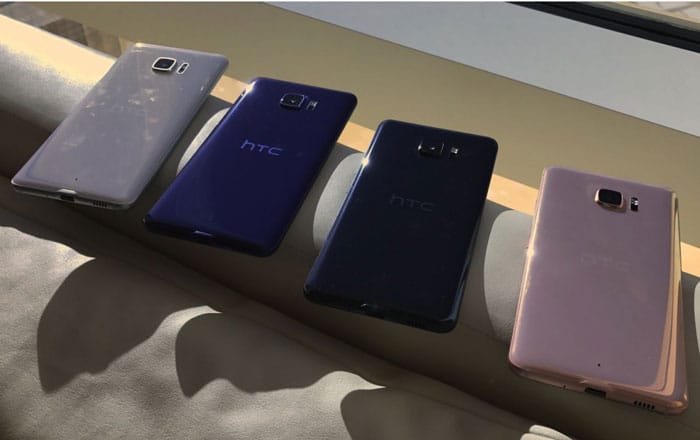 As far as specs go, the Ocean Note might be equipped with a massive 6-inch QHD screen, a 16MP front-facing camera, 4GB of RAM, 64GB of internal storage, USB-C support, a top-of-the-line Snapdragon 835 processor, and a 4000mAh battery. It could be sold in white, pink, blue and black color options.

Other than the U Ultra, HTC is also expected to unveil the U Play and One X10 at its event. We’ll keep you updated as and when the trio go official.