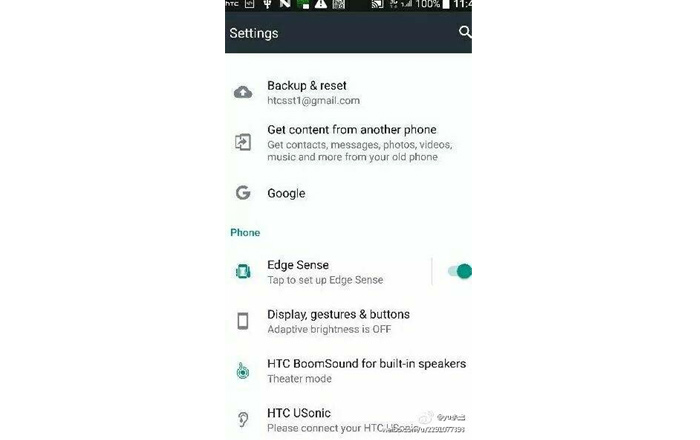 HTC’s Ocean smartphone has been in and out of rumor mills for quite some time with no official news or launch date in sight. A Chinese website has now gotten hold of screenshots from the Settings menu of an unnamed handset which may possibly be the brand’s next high-end device.

The most interesting thing to come out of the leak is the presence of a feature called Edge Sense. This mysterious ability has been talked about before, with some speculating that HTC plans to add something like a touch-enabled area along the side of the phone.

This section might be activated by scrolling along the side or tapping on it to choose between various shortcuts like Messages or Camera. A simpler explanation is that HTC is looking to imitate Samsung’s Edge screen with various options popping up on the curved part of the display.

Also Read: HTC U Ultra, U Play land in India

The only clue the screenshot offers is a small icon of a phone and an outstretched finger poised on its side. The leak also serves up some specs, hinting that the HTC offering will come with a USB Type-C port and Android 7.1.1 Nougat. It might be powered by a top-of-the-line Snapdragon 835 SoC.

Other possible features are a 5.5-inch panel, HTC’s Sense AI assistant, 64GB of internal storage, 4GB or 6GB of RAM, and support for mobile VR. On a related note, the company’s also reportedly working on a Vive smartphone which will presumably specialize in handset-based virtual reality.