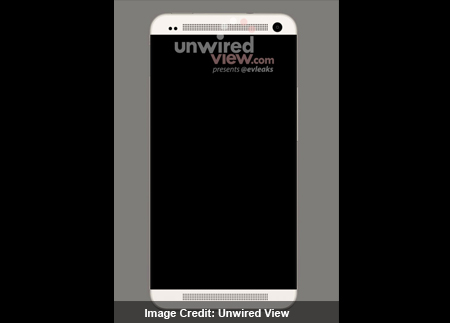 The HTC M7 flagship Android smartphone, which the Taiwanese company is expected to unveil next month, has apparently emerged in the form of a press render which seems to have slipped out of the brand’s offices. We’ve heard rumors about this device in the past, but never had an image showing its purported design been seen by us. Aimed at replacing the One X from the flagship spot, it is said to kick in Google’s Android Jelly Bean OS, and comprise of some extremely advanced specifications.

This supposed image of the M7 by HTC has come out owing to a ‘trusted source’ of Unwired View who has access to an early version of its firmware. This render is part of a short animation clip meant to instruct new owners on first-time SIM card installation, claims the website. But the first thing that one notices is that it doesn’t feature any sort of branding on its front body. Hence, it is being speculated that the exact model scheduled to debut later this year will be a bit different from this one.

Past reports have pointed out that the device may come equipped with a 4.7-inch screen, but will kick in a much larger pixel density. 468ppi to be exact, making its visuals more than 40 percent denser than the iPhone 5. Its front will be highlighted with 1080p SoLux display, which is capable of providing a wider range of viewing angles, color accuracy and better outdoor visibility. This device is expected to run on a quad core Qualcomm processor that will be clocked at 1.7GHz.

Furthermore, 2GB of RAM will be there to assist the CPU in its operations. The phone is also being said to possess 32GB worth of internal memory. A 13MP rear camera with advanced new offerings as well as a 2MP front snapper capable of capturing 1080p videos will also be infused into the it, say reports.

The HTC M7 will most definitely be unveiled at the Mobile World Congress in Spain during February this year. Speculations are rife about its release date having been planned for immediately after this event.