HTC might end up monetizing its Sense UI with ads

HTC is having a rough time achieving sales targets for its flagship smartphones and it might have found a solution to its financial woes through monetization of the Sense UI. According to a new leak, the company is looking to bring ads to the homescreen with Sense 7.1.

From what has been revealed, HTC will implement two different strategies with advertisements. In the first goal, it’ll be offering sponsored applications in order to generate revenue. Clicking on these ads will take you straight to Google Play to download them.

The second approach will be auto-promotion of its own gadgets and accessories as well as other devices and services from its partners. While this is certainly a great way of making cash, we really don’t see it solving HTC’s problems. 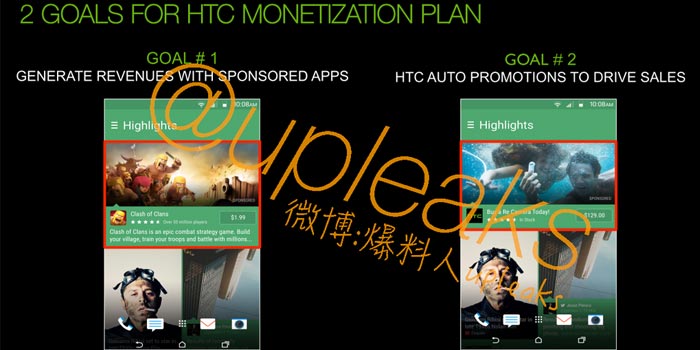 In fact, matters could get worse since who in their right mind would spend loads of cash on a device and be willing to see ads on their homescreen? Well, to clarify things, the advertisements will be visible in the BlinkFeed UI only, which is a key component of the Sense UX.

HTC’s plans were leaked online by @Upleaks which has been very accurate with the information shared about the company’s devices in the past. Nevertheless, there’s still the possibility of this information being fake.

Another possibility here is that this monetization plan could just be for the standalone BlinkFeed experience which the OEM plans to bring to other Android devices in the near future. In this case, it makes perfect sense throwing in ads for as long as the app is offered for free.

Certainly, the plan to monetize the Sense UI on HTC phones is something that will not sit well with fans and customers. We’ll keep you updated with any new developments in this story – So stay tuned.