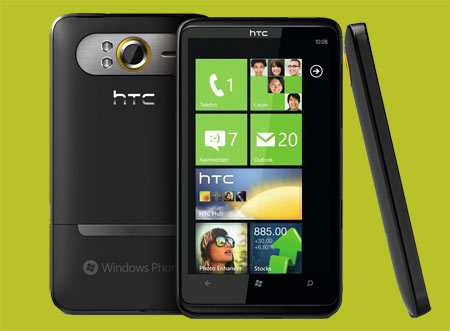 Considering the latest buzz words in the tech realm are ‘smartphone’ and ‘tablet,’ are we saying a little too much, when we’re referring to the HTC HD7 phone as the next ‘smarty’ in town? With the two aforementioned categories already having borrowed so much from each other, the fact that this HTC handset knocking our review doors is dressed in a mini-tablet attire, isn’t really helping our cause. Going by the present scenario, tablets do look like they’re serving up as huge phones with the inclusion of voice ability while emerging tabular smartphones also seem to be setting the market ablaze. Just recently we got to lay our hands on the Dell Venue Pro and yes it’s yet another Windows 7 smartphone in for a complete analysis.

Probably HTC does not want to be stereotyped in the ‘shed the flab’ category and this seems evident with the HD7 which has rather gone bulkier in size with 4.8″ x 2.68″ x 0.44″ dimensions compared to the HD2. A subtle yet attractive device with a hint of style barged out of an all-white box along with accessories such as earphones, wall charger and USB cable. The front surface is dominated by the 4.3-inch touchscreen. Remember, the row of physical buttons on the HD2? Well, here they’ve been replaced with touch sensitive buttons – Back, Menu and Search. Above and below the screen are strips of speakers.

There are several factors which form the defining structure of a smartphone and the huge screen layout seems to be in this case. The mirror reflective 4.3-inch screen stared right into our eyes. The rounded edges are built of metallic grey material while the black back adorns a rubberized texture. More than half of the upper backside serves as a backflap which also houses speakers, 5 megapixel camera and dual flash. A hinged metallic door has been employed to serve as a stand while you watch your favorite videos and movies. It intricately crafts windows to reveal the camera, speakers and dual flash. 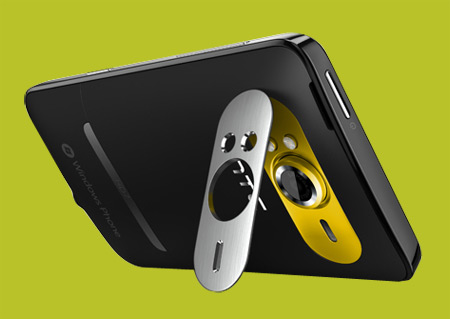 The right edge shows silver accented volume and dedicated camera buttons while its opposite end is maintained smooth. The upper edge has the power button fixed on the right side and the lower end affixes standard 3.5mm and mini USB ports. The front side is maintained flat just like a tablet as the backside goes curvy. The curvaceous device has the company and product name embossed on the backside.

Unlike the HD2 that was fueled by Microsoft Windows Mobile 6.5, the HTC HD7 takes a step ahead by employing Windows Phone 7. The block-building like interface enables easy placement and shifting of your commonly used icons while an arrow situated on the top right side takes you to a list form with all its features. The People icon lets you set up an account and import all your contacts. Besides, Microsoft Office is inclusive of Excel, Word and PowerPoint. The list also provides access to Alarms, Calculator, Calendar, Camera, IE, Maps and Games. Although functions can be simply pinned onto the homepage, some may miss a homescreen. The device comes with a plethora of color themes to choose from.

All your music and videos are stacked under Music + Videos while Marketplace gives access to numerous games, apps and music. We could instantly connect to Wi-Fi and also download mobile applications. Xbox Live for Windows 7 has been optimized for a mobile feel with a mix of free and paid games. You can also personalize your avatar and the interface is easy to navigate. 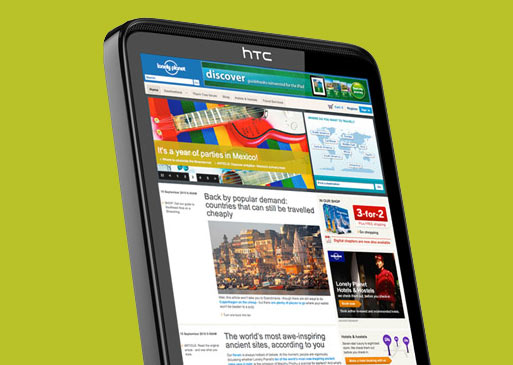 Running on the same 1GHz Snapdragon processor as its predecessor, the HTC HD7 comes with 512MB RAM. The missing microSd card slot is inevitable and users can lay their hands on maximum of 16GB internal memory which lets you store about 14GB of data. The 4.3-inch AMOLED display provides good contrast and color tones. The sunlight reflective screen followed our commands well. It was quite responsive to our finger touches. In spite of the highlight of a large display, the device does not support DivX and Xvid. The HD7 supports video formats such as WMV, H.263, H.264 and MP4 while the built-in audio player is friendly with formats like WAV WMA, eAAC+ and MP3.

Going by the latest trend, HTC has employed a 5 megapixel camera along with HD video recording up to 720p. Under settings, you can choose the various effects and scenes. It also includes the functionality to adjust flash while the device clicked decent images both indoors and outdoors. The video capturing is fine too and we could choose from scenes like landscape, portrait, sports and beach while adding effects such as grayscale, negative, sepia and solarize.

The HD7 device has abundant features that help you get glued to the smartphone. The Photo enhancer transmogrifies your snapshot by bringing in effects such as Cinnamon, Sepia, Glimmer, Twilight, Antique, Basic and more. Similarly, Audio enhancer lets you groove to tunes using options like Dolby Mobile and SRS Enhancement. Moreover, the spec sheet leaves room for stereo FM Radio with RDS. However, music buffs may not be pleased with the audio quality. The loudspeaker isn’t loud enough while listening to music via in-ear earphones was better comparatively. 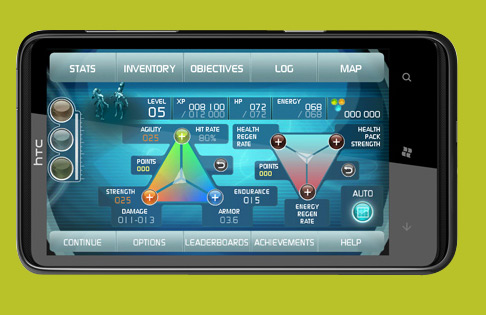 The HTC Hub has been pinned on the homescreen which allows you to add more content to your device like apps, ringtones and so on. The gaming scenario isn’t as large as your iPhone App Store but would suffice the casual gamer within you. We downloaded a number of games while the touchscreen worked in tandem. We could also access the games downloaded from Marketplace through Windows Xbox Live. The battery life squeezed through a day with average usage.

The HTC HD7 poses a stylish and sophisticated look.

The kickstand comes across as a good add-on.

At 4.3-inches, we wish the screen resolution would have been on the higher side.

Video formats like DivX and Xvid are given a miss.

The audio quality could have been better.

A few years back, shelling out a high price tag for a handset may have sounded bizarre. Smartphones exhibiting a gamut of features and a 25k+ price tag isn’t something new these days. The HTC HD7 phone is no different at Rs. 28,900 with a set of high-end features and a fair share of highs and lows. The HD7 climbs our rating ladder up to 8.7 on 10.