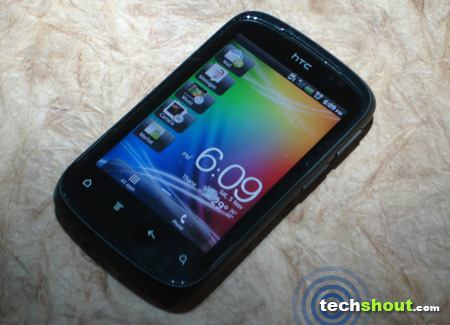 The HTC Explorer A310e arrived in India this September, and yes we’ve wasted no time in grabbing our hands on a unit of this highly-anticipated smartphone for review. If you must really ask us why, well, it’s not every day that you get to feast upon a budget-friendly HTC smartphone in a rather alluring design. Precisely, the Explorer carries on its shoulders the massive responsibility of convincing mobile phone users to venture into HTC’s very affordable smartphone terrain. So has it done a good job at that? Read on.

The HTC Explorer box we received packed in no more than a charger and the device in question. At first glance, the handset looks like any other HTC smartphone, including the matte-finished rear with the thick metallic strip inscribed HTC running below the camera lens. The front is a glossy 3.2″ touchscreen with familiar touch sensitive buttons running along the bottom. Being bright and vibrant, the screen’s only flipside is its warm welcome to fingerprints and smudges. The phone bears a compact lightweight profile, reading at 102.8mm x 57.2mm x 12.9mm and weighing a mere 108gms. Sitting well in the palm, we loved the grip added by the non-slip backside. A 3.5mm headphone jack and power of/on button are affixed along the top edge. Running down the right rim are the volume tweak buttons while the left border is lined with a standard micro-USB port. 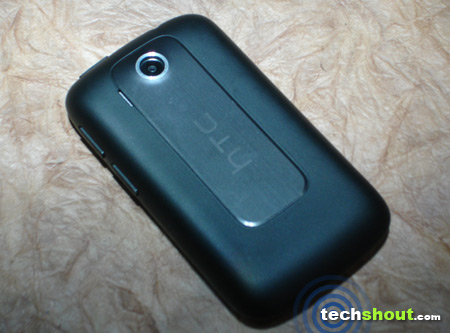 A mere 600MHz of CPU processing speed and 512MB RAM holding things together did put us in doubt at first as far as performance of the phone was concerned. But around half a day of usage, and we could already see the Android 2.3-powered Explorer doing a good job in tandem with the HTC Sense user interface. Version 3.5 of Sense, in fact should get brownie points for being a notch above the earlier iterations at offering a complete smartphone experience. We went through all tasks in a jiffy, without having to mull over lags and sloppy behavior, quite a step away from recent entry-level Android phones. In all honesty, there really was nothing to bicker about the phone until it went off on its own, and simply refused to power up again randomly after 3 days of smooth operation. Removing the battery from its compartment and placing it back in position did the trick though. 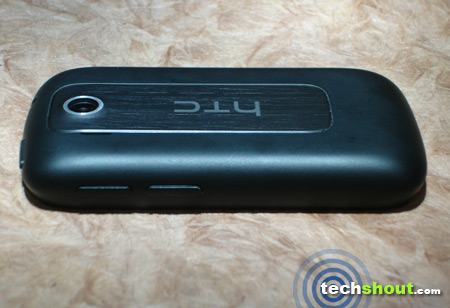 What’s most noticeable about the HTC Sense 3.5 UI that the HTC Explorer includes is the newfound ability to dock icons on the side of the screen. Besides, there are 7 homescreens that can be customized to include a range of personalized options. The look of the interface is more streamlined now, with customization attributes appearing friendlier too. If not for anything else, we’re betting our money on the new People’s tab ringing in with social networking enthusiasts. Why? Because of the said obvious – its seamless wrap-up of social networks, precisely Facebook. What it basically does is that it displays the call history along with emails and Facebook updates as threads for contacts, which it make it a really nice feature on the whole. 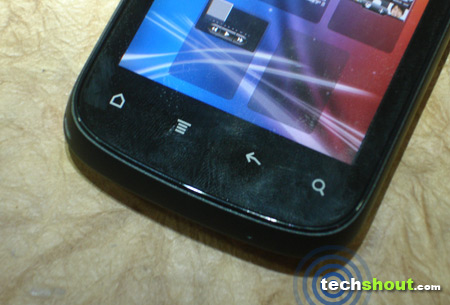 Speaking of social networking, we inspected the Explorer’s connectivity next. Like most things connected, it’s supportive of Wi-Fi 802.11 b/g/n and Bluetooth 3.0. The 3G-enabled handset is capable of running 7.2Mbps of HSDPA speeds, and approximately 384kbps of HSUPA speeds. YouTube, Places, Navigation and Google Maps are among the other things that should suffice the odd mobile users’ internet connectivity needs. As for the implanted 3MP camera, there’s nothing really that can be called exceptional about it, though the interface is quite noteworthy. Take for example, the ease with which you can add effects while clicking a picture or even the ability to immediately share snapped up images on the web. And while the quality of outdoor image shots is passable, you’ll really find yourself complaining about grainy pictures when in low-light environments. If you must be brave enough to give the supported 480p video recording a go after having tried your hand at still images, don’t say we didn’t warn you. 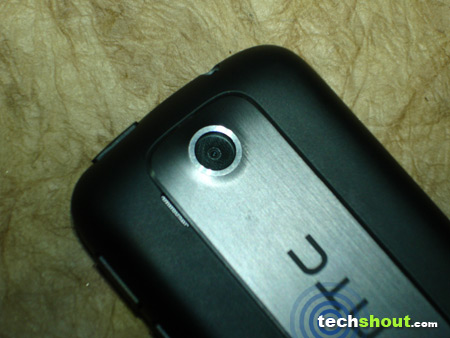 Further probe into the multimedia department left us trying to figure out why HTC thought around 90MB of memory (with pre-loaded applications) would suffice. And it made us all the more skeptical on whether we’d want to test the 600MHz processor, by putting the external memory slot to use, which by the way supports a maximum of 32GB storage. The unit we received was inclusive of a 2GB memory card. The phone’s media player is primitive and packs in conventional audio widgets and options. There is also a familiar equalizer setting, and the handset is enabled to play a wide range of audio formats. Just like video recording, the video player too can be given a miss. On the whole, audiophiles will appreciate the loud and clear music being belted out. The unit we received for review was loaded to the brim with applications and games though. With some proving as worthy ways to pass away idle time, many others were actually useful. The list includes the likes of Asphalt 6: Adrenaline, Best Deals, Uno, Pro Cricket and NDTV.

In our time spent with the HTC Explorer, the phone really stood out as being very user-friendly and non-sluggish.

Unlike most basic Android phones that are power hungry, the Explorer does a rather commendable job in this department. We got close to a day and half of battery juice upon average usage.

The camera is probably the only department where we were really lamenting.

You know how difficult it can be sometimes to point out one single quality that has you attracted to someone. Well, the HTC Explorer put us in a similar dilemma. While there was nothing that left us disappointed, except the camera (again for which using ‘disappointed’ would be too harsh a word), the phone had nothing that left us awe-struck too. We’re giving the phone a thumbs up for being zippy, smooth all along and most of all affordable. And if you’re someone who is looking for a pocket-friendly Android smartphone, this offering beats competitors hands down. Our score card reads a good 9 out 10 for this HTC phone. The Explorer A310e smartphone bears an MRP of Rs. 12,990 though it can picked for Rs.10,799 via LetsBuy and Rs.10,800 from Flipkart.