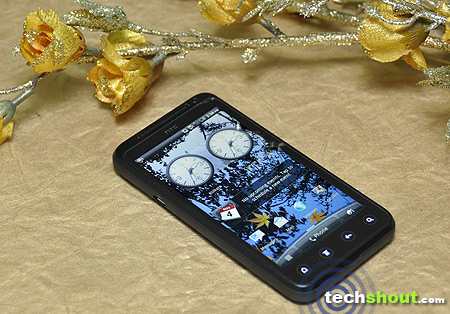 3D technology has already set the world ablaze with its appearance on the big screen, but the matter at hand, or in our hands to be more precise, is how well can it cope on a smartphone. This is a good reason to start off on a review on the HTC Evo 3D. Given the fact that the technology isn’t fairly new, a few handsets have already surfaced over the past year with the no-glasses 3D experience. Going back to its predecessor, the Evo 3D measures slightly lesser to the Evo 4G in dimensions which amounts to a difference of some mere millimeters. And where hardware is concerned, the specification sheet is rather impressive. You can expect it to pack in some good performance with the 1.2GHz dual core processor, 1GB of RAM and the Android Gingerbread OS. 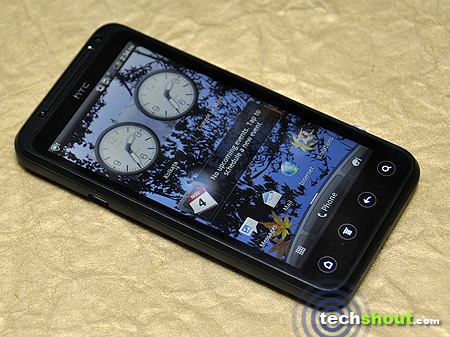 When it came down to unboxing the HTC Evo 3D, we were saved from too much effort since the handset and a charger that comprised of a wall socket and a microUSB cable were all arrived on our desk. Our hopes were high towards the possibility of witnessing something that could distinguish the phone from other handsets. And yes, we’re referring to its 3D capabilities. So far, what we were missing from the package contents was a user manual, earphones as well as an 8GB microSD.

On receiving the Evo 3D smartphone, we couldn’t help but notice its bulkiness. And given its size, the device weighs quite a bit, almost 60 grams more than the Galaxy S II. Going by its design, it sports a clear-cut candy bar form factor with well rounded edges. When it comes to placement of certain hardware, the company has incorporated all components into the Evo 3D handset in a way that avoids a shabby look. Another feature which enjoyed our goodwill was the partially flexible back panel and the firm grip that is offered when held in the hand. 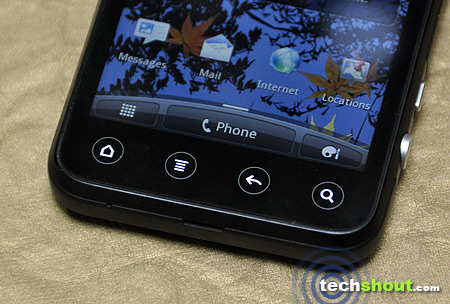 Resting on the front, we found a 4.3-inch qHD 3D display positioned at the centre, the earpiece on the top for receiving calls which is accompanied by a proximity sensor, a LED indicator and a 2MP camera on its sides. The lower end packs in four capacitive touch buttons for quick access to the homescreen, settings menu, search and a back option. When flipped over, the dual 5MP 3D cameras are sure to instantly fall into anyone’s line of view. Between the two, we found the dual LED flash and a loudspeaker that almost slipped by unnoticed. Besides these, we came across a 3.5mm audio jack, a sleep button, volume controls and a dedicated camera button with the 2D to 3D switch to conveniently flip between the two capture modes. 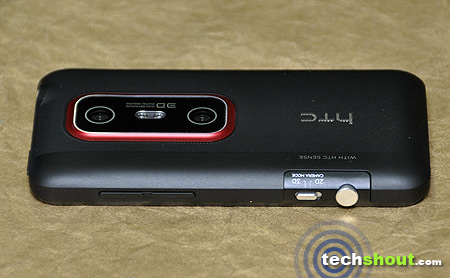 Moving on to the interface, the HTC Sense UI hasn’t changed much over the past few years. The default calendar-like clock is still retained with all its glory. Flipping between each homescreen was seamless as it displayed a 3D cube-like structure on the way. And on giving it a hard flick, we witnessed a whirlpool of all widgets moving around the screen – a real time killer. Our main quest within the third-dimensional interface is to find every aspect of convenience in accessibility. Loaded with the four most commonly used shortcuts, we could easily start the camera, make a phone call or message and even run the email client straight from the lockscreen, meaning without unlocking the HTC Evo 3D. Within the application menu, the screen is divided into various pages based on the number of apps installed. Also, the slider located on the lower part of the screen allowed us to easily switch between different menus such as all apps, frequent and downloaded apps.

The default apps hold nothing new besides the HTC Watch video streaming service. Most applications are similar to other Gingerbread-based devices. The Android Market on the other hand had a ‘HTC Recommends’ tab with a number of applications picked out by the company. We personally had a great browsing experience with the HTC Evo 3D. Web pages loaded quickly and these were vividly displayed with clarity. One of our personal favorites was the tab menu which was accessible by simply pinching the screen. When it comes to Flash technology, videos did start off a bit sluggish, but page animations from on-page advertisements loaded instantly without any delay. While viewing desktop-based sites, text and images automatically got formatted and wrapped to perfectly fit within the screen in just a matter of seconds. 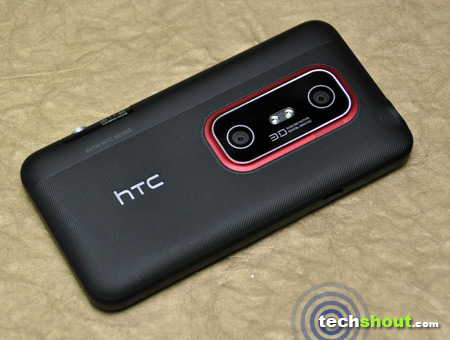 The pre-built YouTube app never fails to entertain, especially with its latest 3D videos. So we’re finally come to the part where the 3D can be tested. At present, there aren’t many clips uploaded in 3D, but the few we came across were delightful enough. But we’ll tell you that it’s obviously too optimistic to expect a proper 3D experience at this stage. The strain the extra effects had on our eyes was way too noticeable. It really wasn’t possible to maintain direct eye contact with the screen for more than five minutes while viewing content in 3D.

With the dual 5MP 3D capable cameras, we obtained brilliant stills as well as videos in 720p HD. When flipped to the 2D mode, the camera showed no sign of letting us down through the bright and clear images it had to offer even in low light conditions. As we continued to entertain ourselves, movies played really well and with the SRS virtual surround sound, the experience only got better. We took the lack of earphones rather personally when it came to music playback. But putting that aside, the quality checks were done on one of our own headsets. 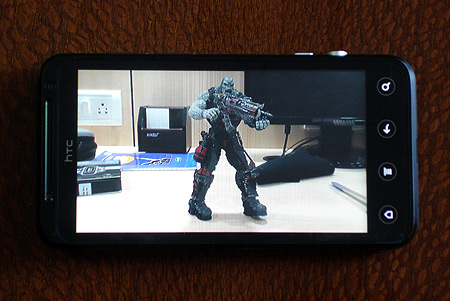 Coming to performance, the smartphone failed to show any signs of lag in menus or in apps. So the 1.2GHz dual core processor is indeed powerful. Apparently the Qualcomm MSM8660 doesn’t stand a chance against the Tegra 2. Or so says the benchmark results we tried on it as the device stands in third just below the LG Optimus 2X and Motorola Xoom. However, Nvidia SOC-optimized games like Riptide run flawlessly on the HTC Evo 3D.

The touchscreen proved to be highly responsive and we could flick through screens even with our nails.

The dedicated camera button with 2D to 3D switch makes it convenient to flip between capture modes.

Continuous viewing of 3D content does apply stress on the eyes, making it hard to watch content for more than a few minutes. 3D is the main attraction, although it’s most likely to be the least used on this smartphone.

The HTC Evo 3D most certainly did put on a good show and lives up to its expectations, but the 3D feature which happens to be its main attraction is still in the early stages and could use a few improvements. Until then, the handset does give a good insight of what can be expected from the technology in the future. Based on performance, accessibility and the decent battery life, we give it a pleasant 8.5 out of 10 rating.