HTC Desire XDS price in India spilled out via e-retailers 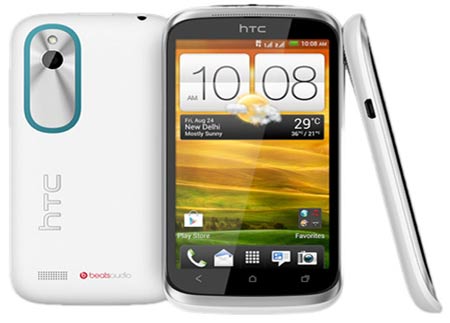 This is the second instance within a short span that a low price smartphone christened HTC Desire XDS from the Taiwanese manufacturer, has stealthily reserved itself a spot with a couple of e-retailers in India. The U handset belonging to the corresponding portfolio of HTC, also made its presence known across the country in a similar fashion.

Running parallel to the U, the HTC Desire XDS houses a 4-inch 480 x 800p display, but employs Super LCD technology instead of flaunting an LCD screen. It draws a chug of Android Ice Cream Sandwich and is fueled by a dual core Qualcomm Snapdragon chipset. The 5MP camera integrated on its flip side right below an LED flash, offers attributes like auto focus and a BSI sensor. 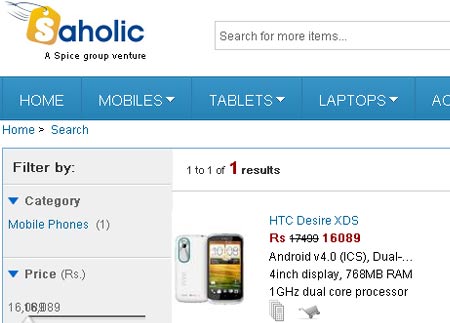 No details have been spilled out concerning the inbuilt storage space, but the online outlets have stated that the overall capacity of the HTC Desire XDS can be expanded by up to 32GB with the help of a microSD card. There also exists 768MB of RAM. Apart from concealing dual SIM ports, the smartphone’s rear panel accommodates a 1,650mAh Li-ion battery under its hood.

If any phone would’ve offered features as such against the retail value that is demanded by the HTC Desire XDS, a few months back, it could’ve been considered as a more-than-ideal proposition. But in a time and age like this, when the nation is being bombarded with low-budget handsets sporting components like quad core chipsets and Android 4.2, we are compelled to say that the 4-inch gadget will have to toil so as to garner some attention. 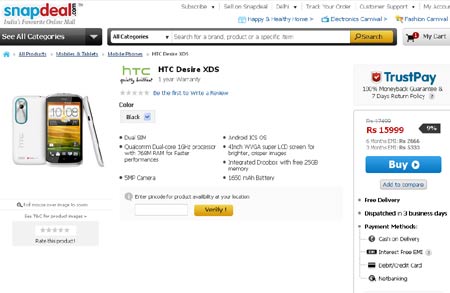 The Desire XDS has been made available at Rs 16,089 through Saholic, whereas bargain hunters can also visit Snapdeal to find the gadget put up on sale at a slashed down rate of Rs 15,999. While the former e-retailer has proffered it only in the white color, the latter has the black-hued variant as well.