As expected, HTC has revealed a third version of the Desire 820, the 820s, which has been launched in China. The smartphone is basically the same as the original handset but comes with an octa core MediaTek processor instead of the Snapdragon 615 chip.

Like the Qualcomm module, the one from MediaTek is also 64-bit enabled and it’s based on the same Cortex A53 design. Performance-wise, the chip from the latter is most likely to deliver more juice since all eight cores have been clocked at 1.7GHz, while the former has quad cores at 1.5GHz and the others at 1GHz. 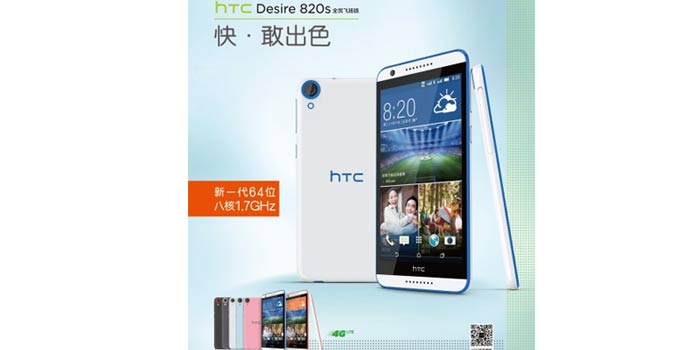 The MediaTek MT6752 SOC might also have better graphics through the high-end Mali 760 GPU. Additionally, the phone will be dual SIM enabled and support Category 4 FDD and TDD LTE bands. And that’s about all that’s new in the HTC Desire 820s.

The phone’s design hasn’t been changed and apart from the new processor, there are no other modifications to the hardware. It continues to carry a 5.5-inch 720p HD display with an 8MP camera and BoomSound speakers on the front, while the rear flaunts a 13MP snapper.

MediaTek processors are very popular in Asia and that’s exactly where the HTC Desire 820s will go on sale. We don’t expect to see the phone reach stateside or Europe, at least not anytime soon.