It can be said that HTC has confirmed it’s going to launch a new smartphone called the HTC Desire 820, with a 64-bit Snapdragon 615 processor at the IFA 2014. The company’s latest teaser image shows a small portion of the smartphone and it even mentions the device to be the world’s first octa core 64-bit Qualcomm phone.

If that wasn’t enough proof for you, Qualcomm recently used the same image to hint about its upcoming chipset and it even released a teaser which shows a sketch of the phone’s internals. The HTC Desire 820 has been a mysterious phone so far, but we’ve got a good deal of information on it, courtesy of @upleaks. 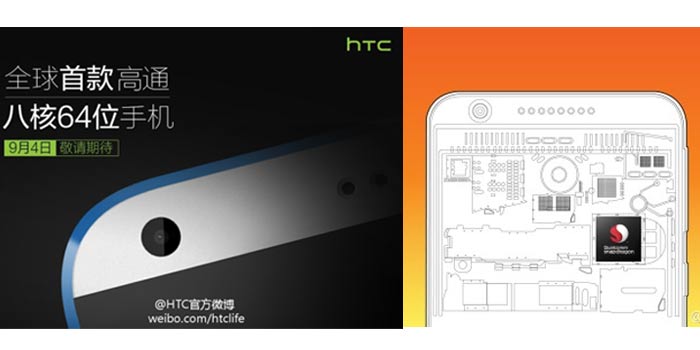 The leakster has revealed the supposed hardware information of the smartphone on Twitter. The device is being developed under the HTC A50 codename and it will feature a Qualcomm MSM8916 64-bit processor. This chipset is actually the Snapdragon 410 that’s found on the Desire 510, so either the company has two handsets to reveal at the IFA 2014 or the source has got its information wrong.

The Snapdragon 615 processor houses a total of 8 Cortex A53 processors, 4 clocked at 1GHz and the others at 1.7GHz. There’s also Adreno 405 graphics and Wi-Fi 802.11n/ac onboard. The leakster notes that the phone will have a 5.5-inch display which is probably of 720p HD like the Desire 816 and we expect it to feature BoomSound speakers as well.

We’re thinking about your future: a #Snapdragon powered multi-core 64-bit smartphone is headed to @IFA_Berlin. pic.twitter.com/CS9w7HZGna

Here’s an overview of the leaked HTC Desire 820 specs:

We’re less than a week away from HTC’s IFA 2014 press event and along with the Desire 820, we also anticipate seeing a new One Max smartphone and maybe even a couple of tablets.