While we patiently await the Desire 820’s arrival next week, HTC has already launched its first 64-bit smartphone in the form of the Desire 510. The new handset is based on the Snapdragon 410 chip and it’s being touted as an affordable 4G LTE option.

Despite the fact that it comes with a 64-bit processor, the HTC Desire 510 is an entry-range release at its best. The Snapdragon 410 is an upgrade over the 400 SOC featuring quad Cortex A53 cores and slightly better graphics via the Adreno 306 GPU. The smartphone continues the same minimalistic design approach you’d find on other Desire smartphones. 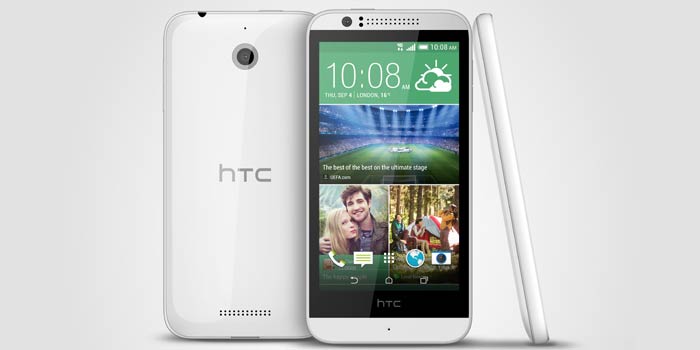 It kicks in a 4.7-inch FWVGA display on the front with on-screen navigation keys and a VGA camera, while the rear plays host to a 5MP snapper. The phone is on the bulky side measuring 9.99mm and it weighs quite a bit as well, at 158 grams. Android 4.4 KitKat is available out of the box with the latest HTC Sense UI and BlinkFeed.

Also see: HTC teases upcoming launch at IFA, could be the Desire 820

Coming to the innards, the device features 1GB of RAM and 8GB of storage. You’ll also be able to throw in up to 128GB of extra storage via the microSD card slot. Lastly, there’s a 2100mAh battery which can deliver over 17 hours of talk time or around 646 hours of standby on 3G.

The HTC Desire 510 will go on sale in options of white and grey in select markets across Europe and Asia. The phone will also be headed to a few carriers in the US.